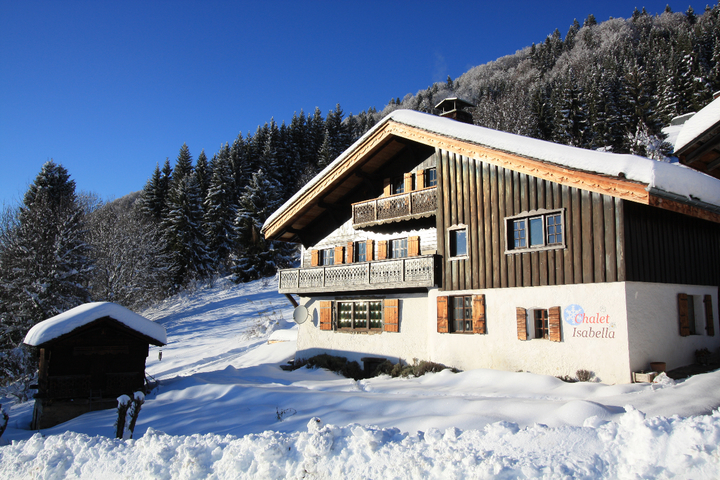 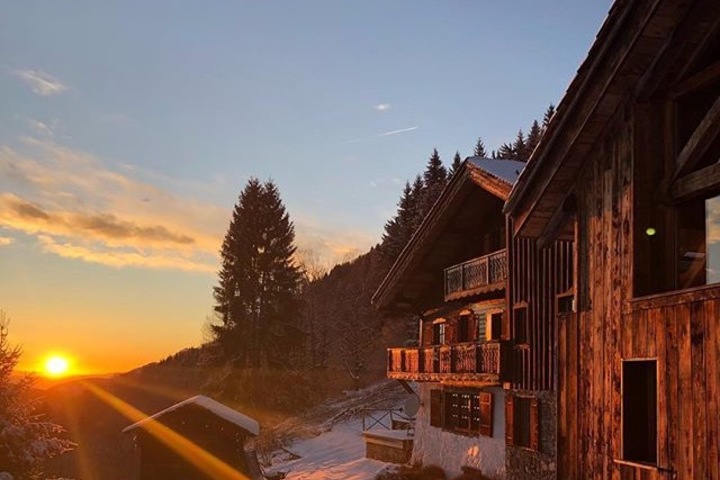 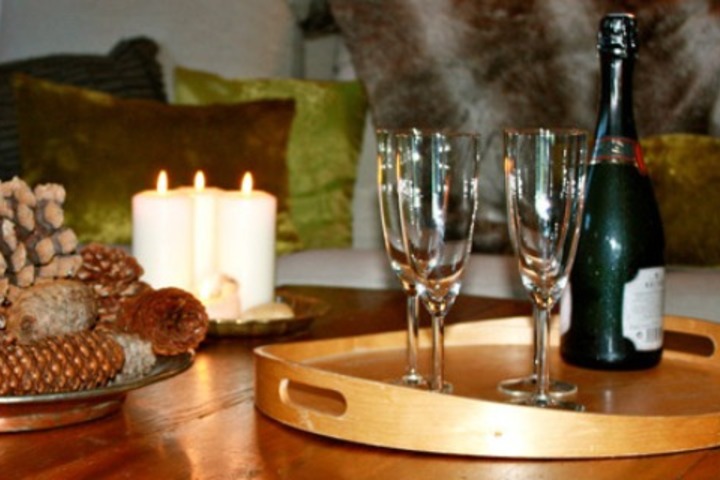 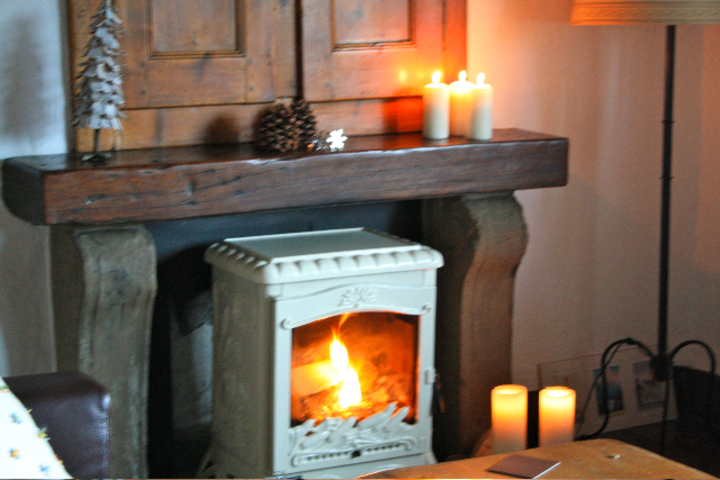 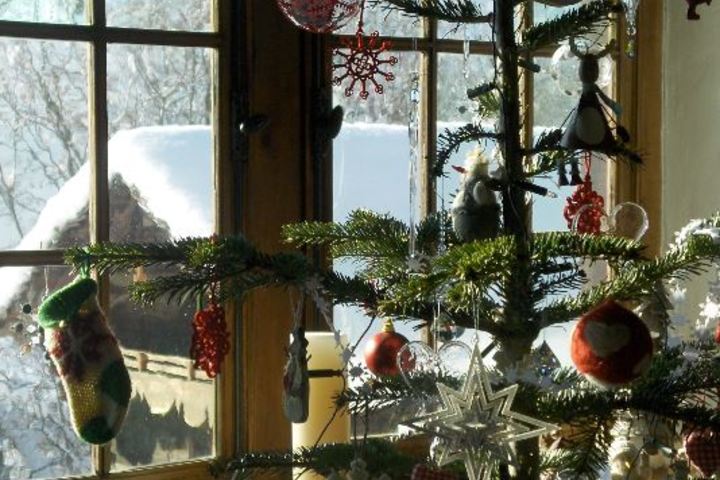 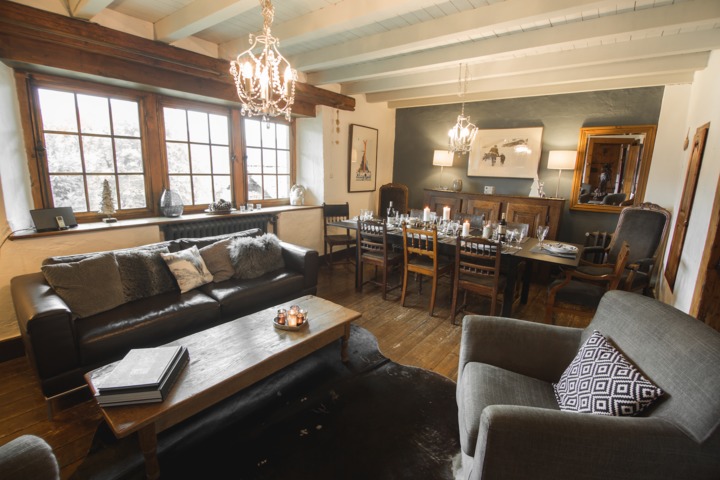 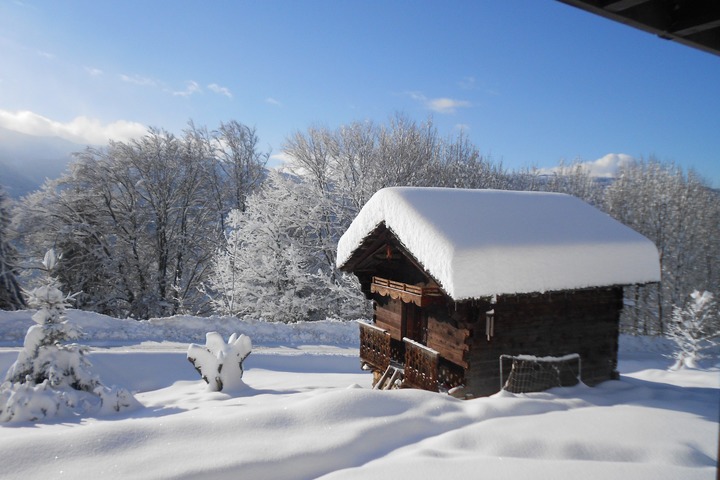 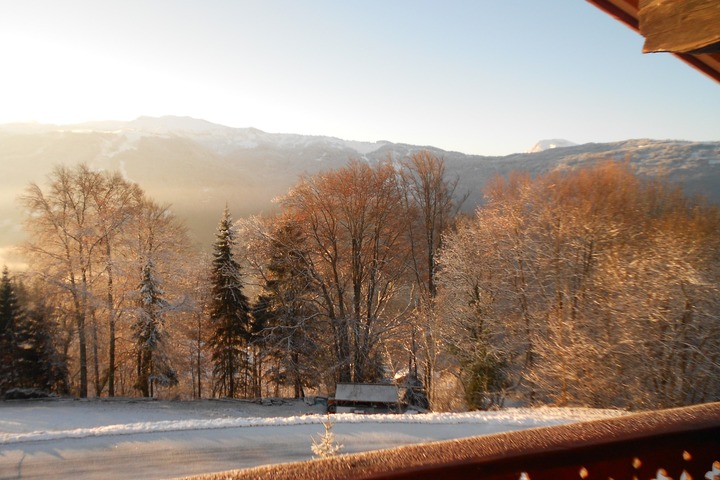 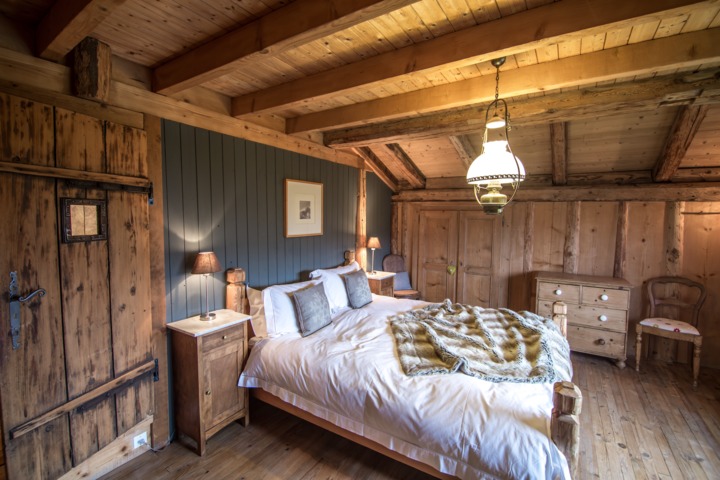 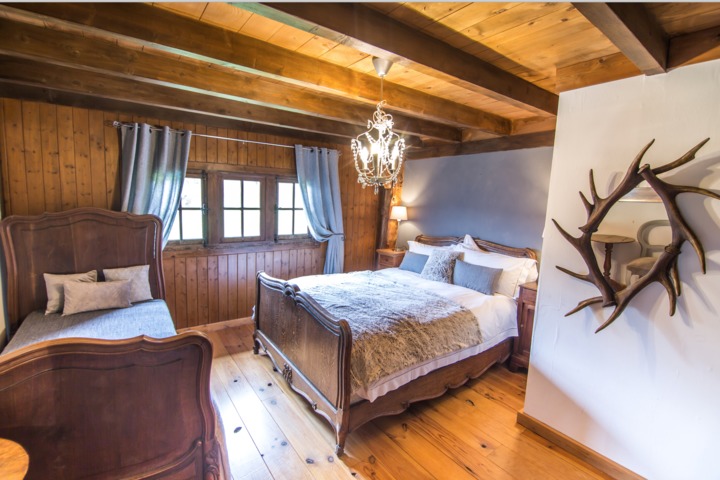 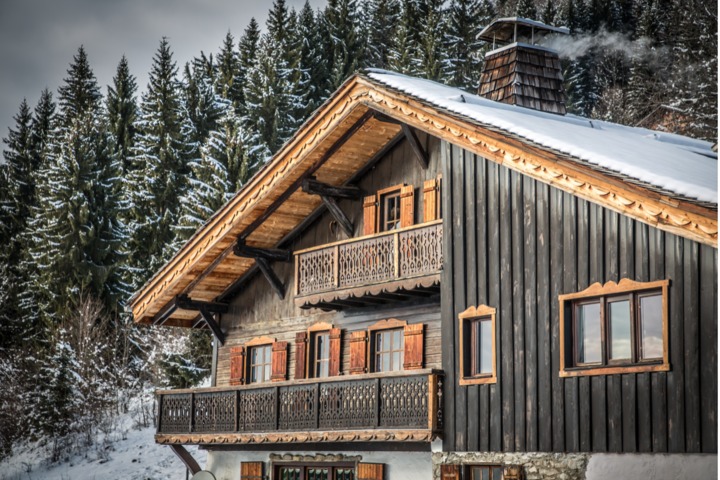 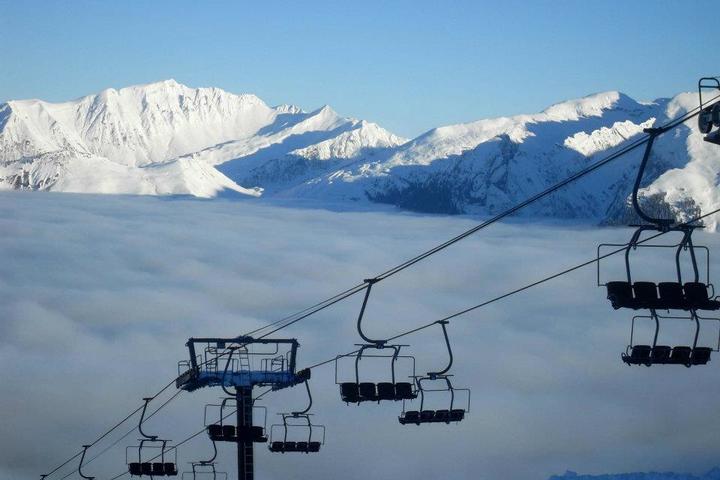 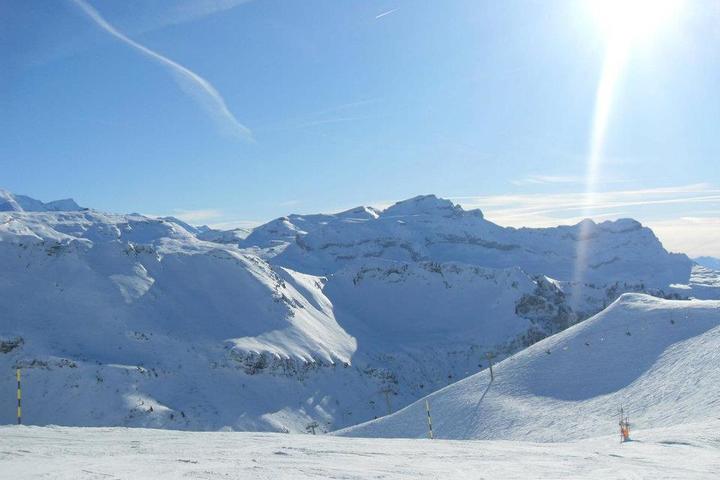 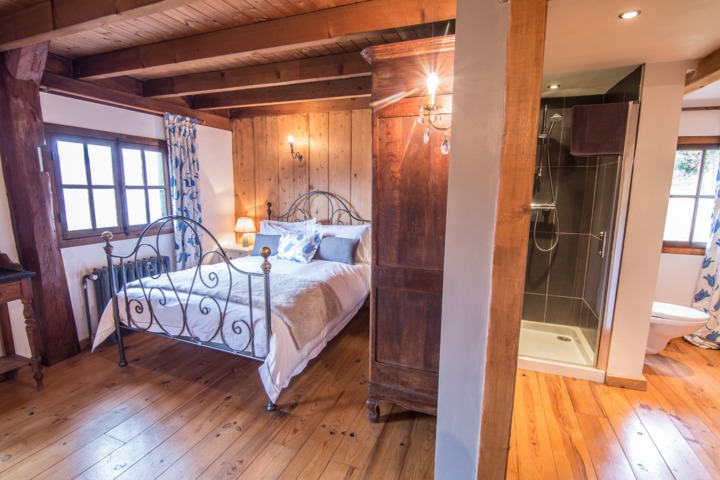 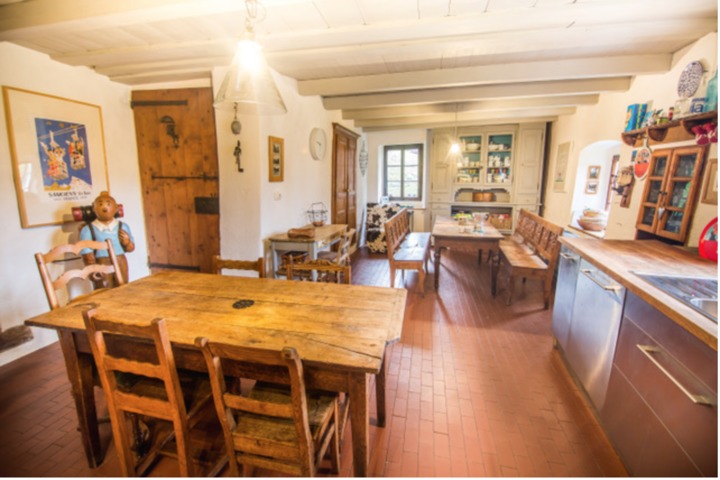 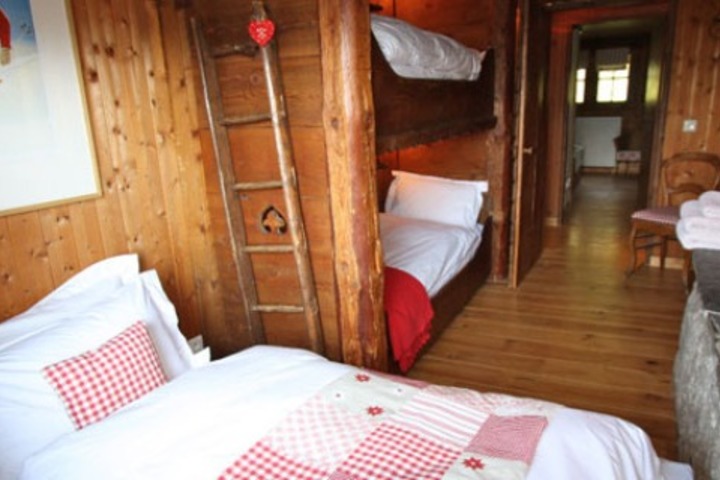 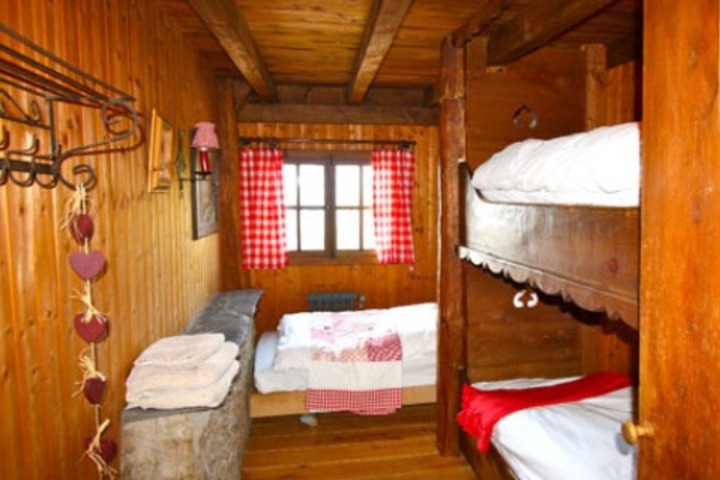 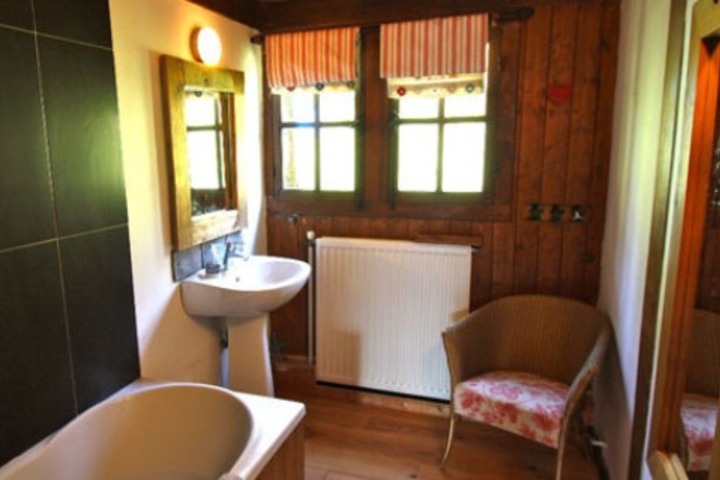 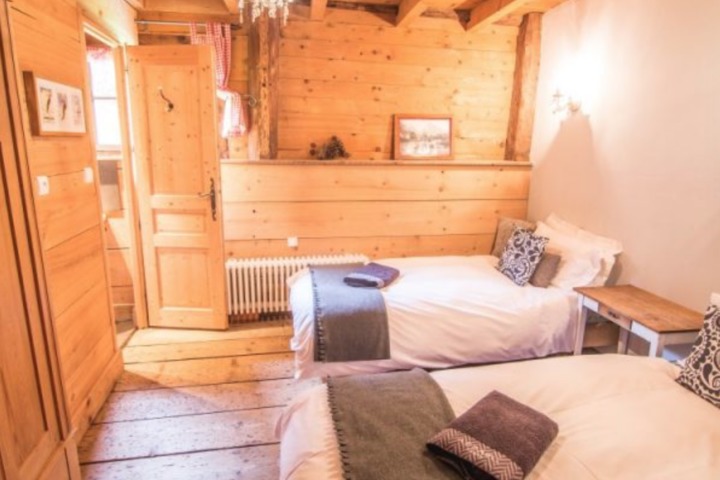 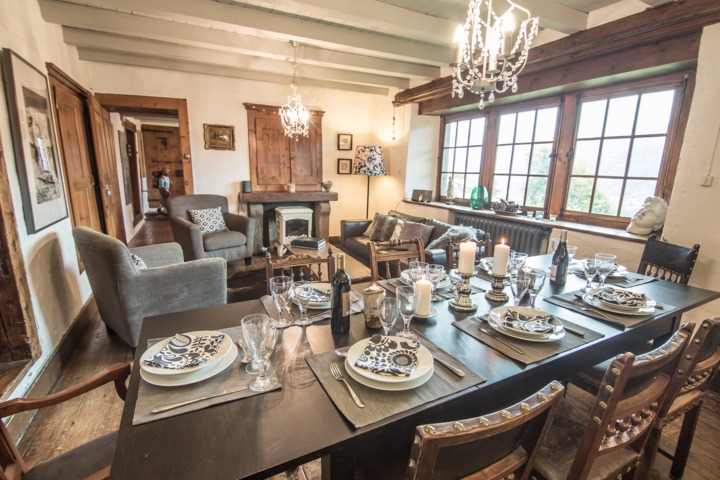 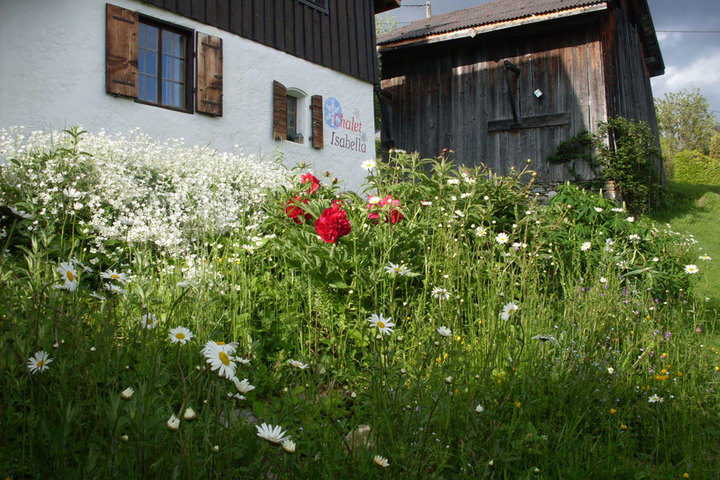 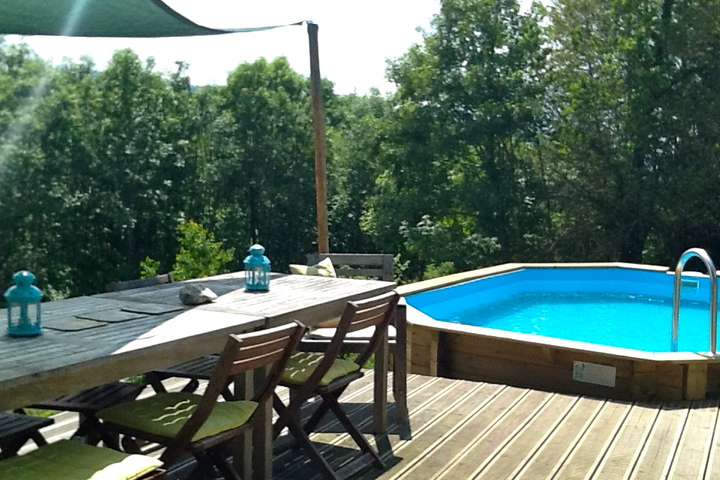 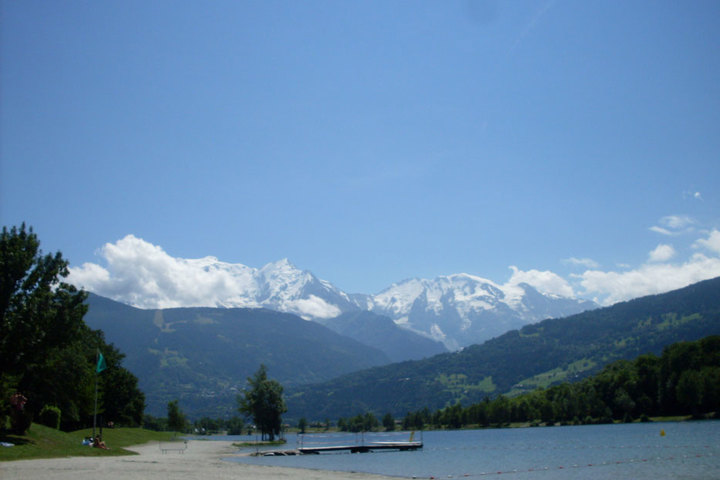 Sleep in King sized Antique beds with white cotton sheets and thick goose down duvets En suite modern luxury bathrooms, a mix of brossé wood, local adroise slates and Hansgrohle showers and fittings, fluffy towels and towelling dressing gowns. Four spacious en suite rooms double bedrooms with either bath or showers and the 5th is a delightful bunk room, which sleeps three and has it's own bathroom with bath just across the hall. Three of the rooms can be family rooms with plenty of room for extra single beds or bunk beds and a cot can be provided if required.

Catered Chalet Service:
Our luxury ski chalet is privately owned and run by us and offers a fully catered service which includes a hearty breakfast with cereals, warm croissant selection and hot and cold options. Aprés ski home-made cakes or biscuits with tea, coffee or hot chocolate. Or head straight for the hot tub.

Four course evening meal served at 8 pm with aperitifs and bottled quality wines,chocolates and coffee. Champagne welcome on the first evening. We will even deliver tea and coffee to your door each morning this season, adding to the Chalet Isabella experience.

Any special dietary requirements please let me know at the time of booking. Once a week is the kitchens' night off, allowing you the evening to explore the excellent local restaurants.

Child Friendly:
The chalet has a fun and very child friendly attitude, if the children are happy, then adults can relax. We have 3 en suite family rooms available plus the bunk room, which the children all love. Children under 14 sharing with 2 paying adults are only charged half the adult rate. Children in their own room are charged 20% off the adult price.

The Grand and Massif is an awesome ski area rising to 2580 ms at the top of the Grand Platieres in Flaine. From there when the is sun shining, the views of Mont Blanc are quite breathtaking. Samoëns, Morillon, Sixt and Les Carroz all link at the Plateau des Saix with Flaine to form the Grand Massif.The highest ski area in the Haute-Savoie, the Grand Massif is a superb snow-sure area and holds the record as one of the top areas in the French Alps, due mainly to the proximity to Mont Blanc and its many north-facing slopes.

Besides record snow cover, the quality of snow is exceptional, thanks to the ideal orientation of the ski area. For those who love powder, Flaine is a white gold mine. And with the help of the latest artificial snowmaking equipment the resort remains open from December through to April. The continual up dating of lifts, most are high performance 4, 6 and even 8 place chair lifts, this gives you rapid access from the valley floor to all the 5 resorts of Samoëns, Morillon, Flaine and Les Carroz and Sixt, with their 75 ski lifts, 68 blue runs, 49 red runs, 12 black runs and extensive off-piste for the more advanced and adventurous.

The fantastic 265 km of skiing is great for all levels with both tree lined pistes and off piste paradise , a vast number of specially marked trails for cross-country skiing (90kms pistes), snowshoeing and ski tourers. Three exceptional pistes not to be missed “Le Marvel”, the 5km beginners paradise. A winding piste that descends through the trees kids love it. “Combe de Gers”, a black powder bowl for the most daring and, “La Cascade”, the longest blue run in Europe, which runs from the top of Les Grandes Platières, 2580 m in Flaine, down to the village of Sixt at 700 m. Absolutely stunning with a lunch stop at Le Refuge de Gers accessible by ski doo only – you call them and they come down to collect you and tow you to lunch!

The aprés-ski atmosphere is relaxed and friendly with plenty of traditional Savoyard bars and restaurants. There are many great authentic, cozy, warm and incredibly welcoming mountain restaurants on the slopes. They are also many Picnic areas, available both covered and open-air.

Both the Morillon Telecabine and the Samoens Grand Massif express and the Vercland lifts are only a few minutes drive from the Chalet - speeding you into the vast ski area of Le Grand Massif, one of the largest and most scenic ski circuits in the Alps.

Le Grand Massif ski area is, reasonably priced and is some of the best queue free skiing in the Alps and has managed to retain much of the charm and beauty of a traditional ski resort. Much of the valley is classified as “Parc Naturel” and Samoens is the only ski resort classified as a “Bourg Historique”.