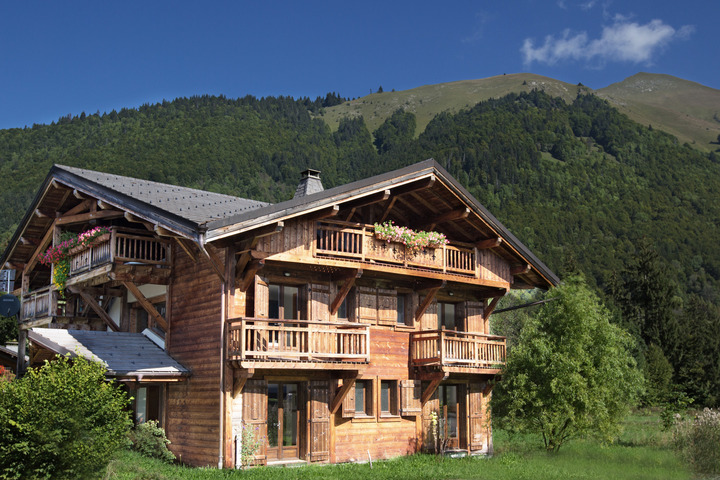 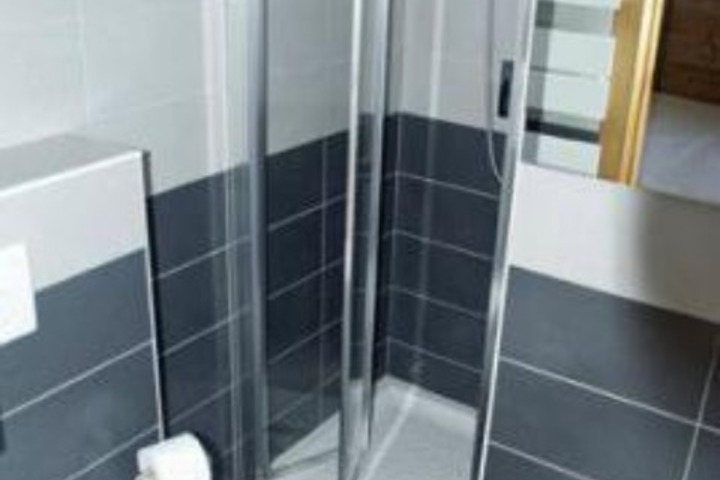 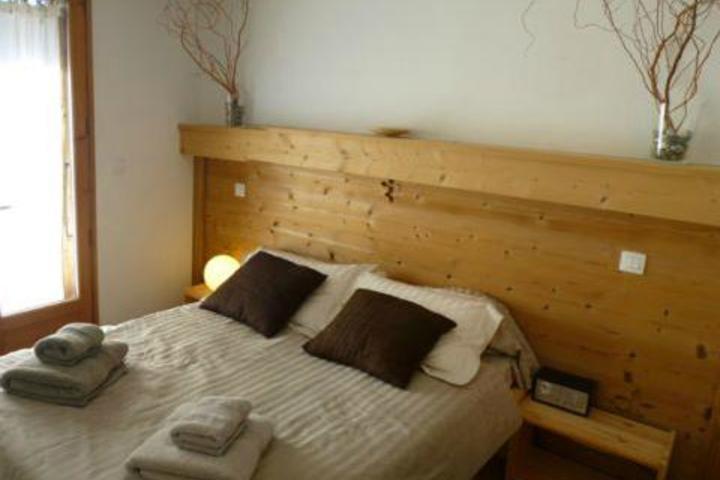 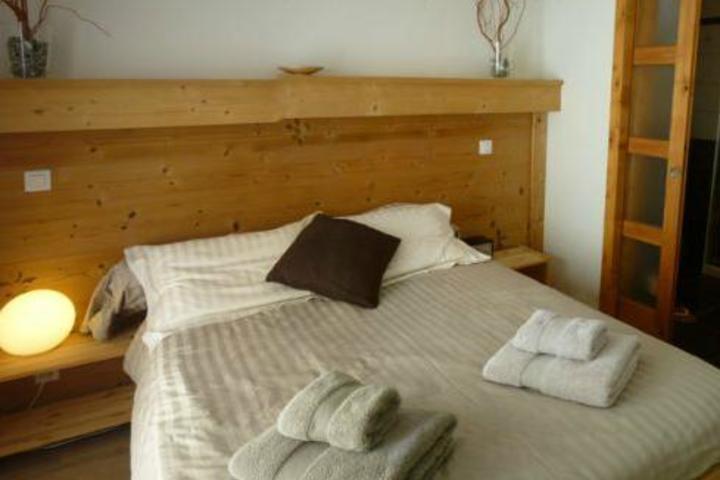 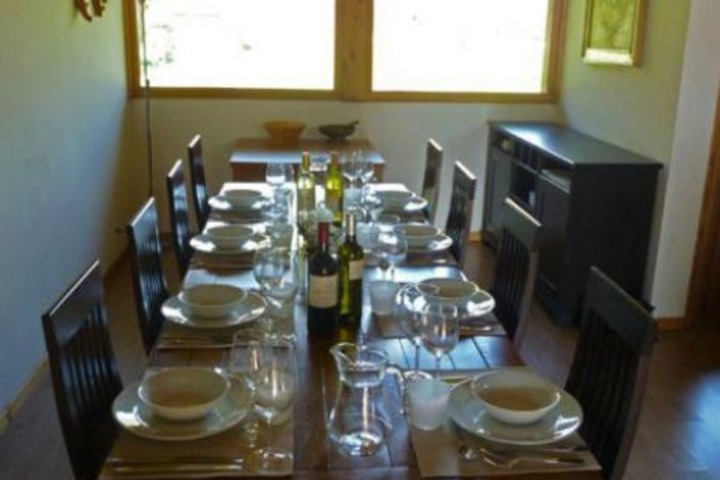 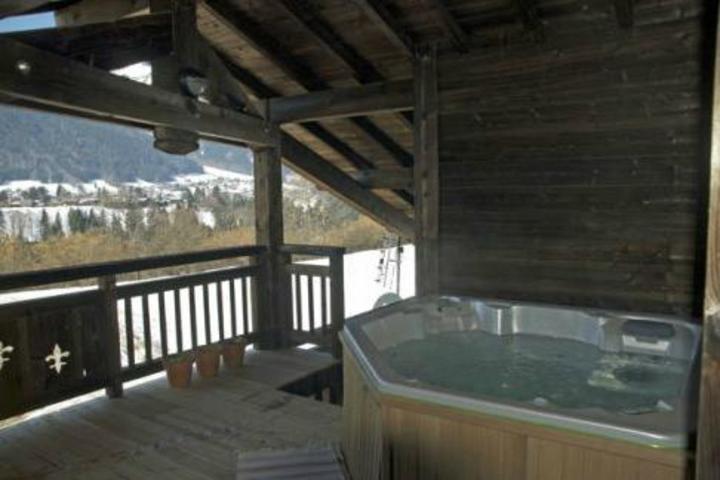 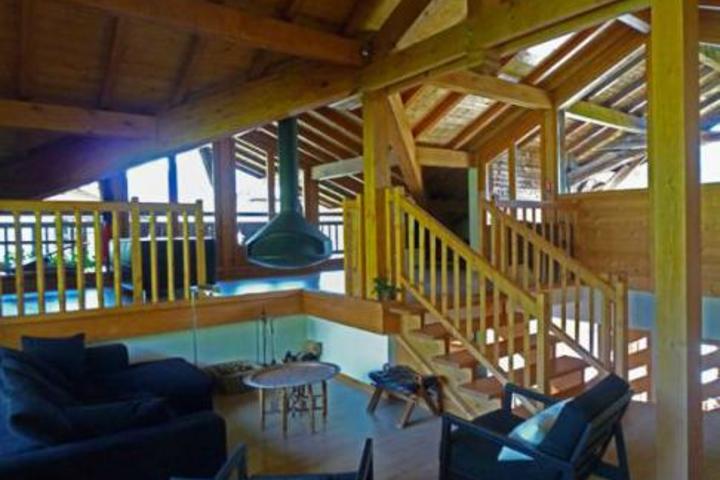 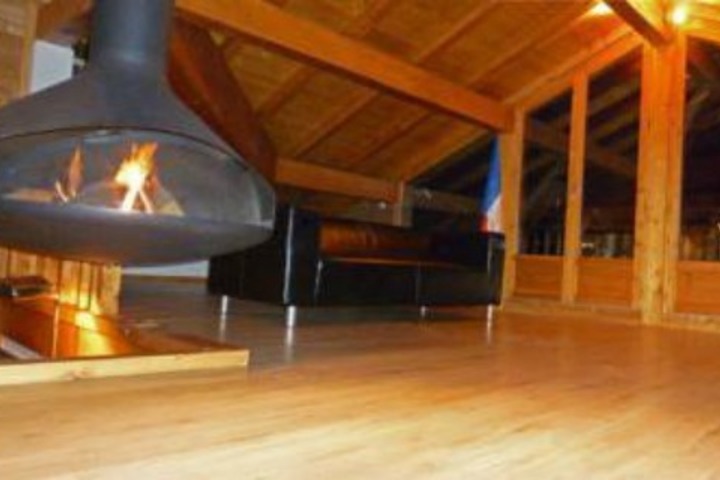 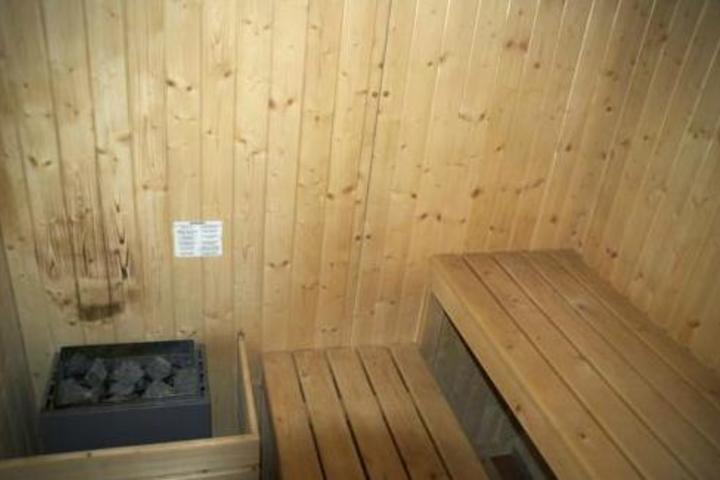 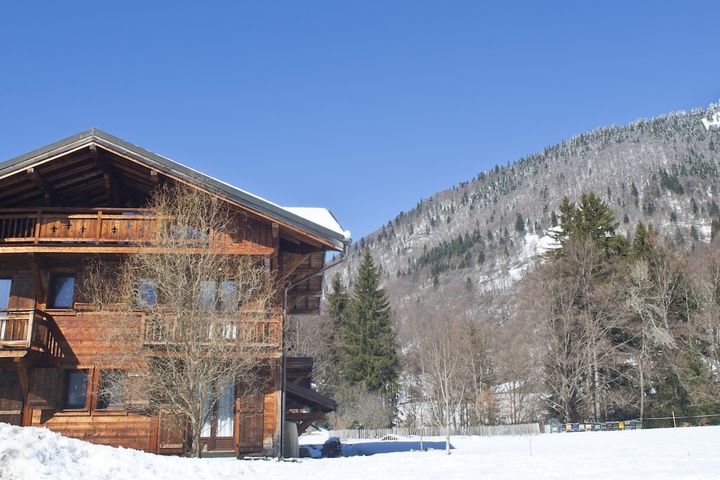 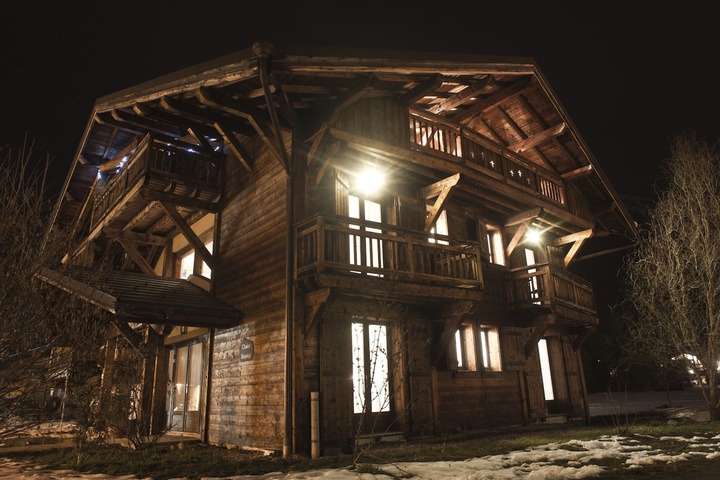 Luxury chalet in the centre of Montriond and close to 3 Morzine ski lifts. Available catered or B&B. With an outdoor hot tub, a sauna and log fire this chalet sleeps 14 and is perfect for a group or family ski holiday.

The Rooms:
There are 5 double or twin en suite rooms, 4 are shower en suites and 1 has a bath en suite with shower attachment. There are also 2 larger twin or double rooms that share our largest bathroom between them; these rooms are in their own private corridor on the ground floor, furthest from communal areas.
The 5 en suite rooms have their own private balconies with views on all sides, the 2 ground floor rooms have doors that open up straight into the garden and terrace.

All the rooms have 100% Egyptian cotton linen, White Company Towels and bathrobes and soap dispensers. Our duvets are silk, lovely and warm in those cold months, cool in the summer ones. We also provide hairdryers. Rooms are heated independently so you can monitor the temperature of your own room, have it as hot or cold as you like! We also have towel dryers in every bathroom.

Outdoor Hot Tub and Sauna:
Built on our upper most balcony for a fantastic view over Mont Chery and Côte d’Abroz. Even in the coldest temperatures the hot tub can keep you toasty for hours soothing away the aches and pains of the mountain.

The sauna is at the bottom of the chalet and it’s a wet sauna (you can throw water on the coals). It easily seats 4 and is switched on daily between 4.30 and 6.30.

Living Space and Hanging Fire Place:
The communal area is at the top of the chalet for the best views from our large open windows. Its split over 2 mezzanine areas, the lower deck has the dining table, and seating. The upper deck has more seating, games and the TV. Plenty of relaxing space for the largest of groups, and in mixed chalet groups allows a few different seating areas but retaining the communal feel.
Half a level down from the dining area is the honesty bar. Beers, sprits, wines and mixers for you to help yourself to and pay for at the end of your stay.
The fireplace is the centre piece of the room hanging from the centre beams of the chalet, the whole fireplace rotates so you can move it around depending on which part of the lounge areas you’re in.

We have free wifi throughout the chalet for those who like to stay connected.

Board games are available on the upper deck of the communal area along with a guitar, electric piano, tambourine and penny whistle! There is also a ping pong table in the garage but you’ll need to keep moving in the cold months!.

The Ski Room
Our unsung hero of the chalet. We have 2 large boot dryers, plenty of hanging space and large ski racks. We’ve even got a sofa for you to sit on whilst struggling with your boots. We keep this room nice and toasty so you can dry out your kit here and not have it in your rooms.

With 650km of pistes, Morzine-Avoriaz and the Portes du Soleil offers extensive world-class skiing at every level.

The Slopes:
From the beginner slopes of Pleney to the famous Swiss Wall run from Avoriaz into Champery, there is something for everyone in the Portes du Soleil, click here for a link to the site. With 12 linked resorts, you never need to do the same run twice in a week! For the more adventurous, the interlinked nature of the resort also provides a wealth of off-piste possibilities.

Ski Lifts:
The main high-altitude areas of Avoriaz, Champery, Crossets and Chatel are all serviced mainly by high-speed chairlifts. With a lift capacity of 224,058 people per hour, queues are rarely a problem. During the busier periods of the season, the sheer scale of the resort means that there are always places you can go to avoid the crowds and ski school classes.

Snow:
Avoriaz boasts a very good snow record, thanks to it's unique location. As it is at the edge of the alps next to lake Geneva, clouds are blown into the mountains and tend to precipitiate snow at that point, right where the Portes du Soleil is. Snowfall is higher here than at many higher and better known resorts. Also at the northern latitude of the alps, temperatures are correspondingly lower preserving the snow.

Freeriding:
With 650km of slopes, there is something for everyone here. The blues and reds of Avoriaz, Chatel and Crosets in particular are very well suited to snowboarders. The tree runs through Les Lindarets are some of the best in the world. The huge area of the Portes du Soleil (website) means that along with the huge variety of kinds of run, you'll also keep finding new gems that you'll want to do again and again. For the off-piste rider, the interlinked nature of the resort opens up almost endless possibilities. The Edge offers guiding to open this up to you.

Freestyle:
The Portes du Soleil has some of the most progressive snowparks in Europe, with something to suit everyone. Avoriaz has the La Chapelle "baby park" with three lines moving up from gentle rollers to get a bit of air from to some small kickers with a metre or two to clear in the air. It's perfect if you're just getting into jumps, you're offered a very gradual progression. There are also a few boxes to get you used to hitting objects.

For the more advanced, there is the Arare park in Avoriaz and the Superpark in Les Crosets. This is where the really intimidating stuff is, and where you can often see the sport's big names getting some practice time in. There's some pretty amazing stuff to be seen, essentially the tricks you see in the big competitions that year. This is where you see quite how big those jumps they hit in the films really are. There are schools that specialize in freestyle skiing and snowboarding, so if you're a bit unsure about getting into a bit of freestyle, then getting that first lesson to get you started down than road could be a really great investment that'll ultimately pay big dividends. Check out the ski and snowboard lesson pages.

Morzine Nightlife
From mountain restaurants to hotel bars at the foot of the pistes to late-night bars in town, you're never far from a drink if you want one. Morzine is popular with seasonaires, so it has a very lively night life. There are English style pubs, French bars and hotel bars. There are also a couple of clubs with distinct discotheque feel to them that are open until about 5am most nights.

Shopping in Morzine:
Morzine, as well as being a ski resort, is also one of the larger towns in the alps. For those who fancy a morning or a day off the slopes, there is a wealth of fashion shops, souvenir shops and of course ski and snowboarding shops. Morzine has market day on Wednesdays, a nice opportunity to see a real French market.

During summer we run Chalet Beatrice on a B&B basis with the option for evening meals.

Summer in Morzine:
Morzine is a bustling place. Alongside one of the largest lift networks operating in the summer are a host of other activities, all high up in the alps!

Morzine Town
Over the years, Morzine has built up a wide choice of summer facilities in the town itself, including a new Indoor Pool Centre alongside the outdoor Olympic swimming pool, tennis courts and skate park.

The prices for this property are listed catered

Check in is allowed on Monday, Tuesday, Wednesday, Thursday, Friday, Saturday, and Sunday