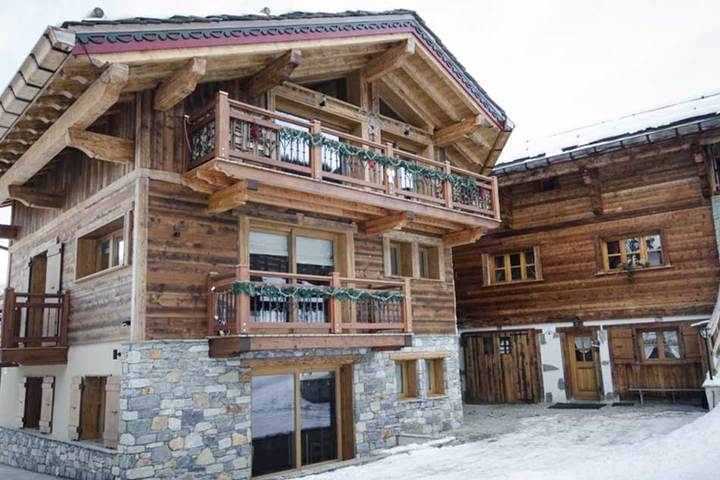 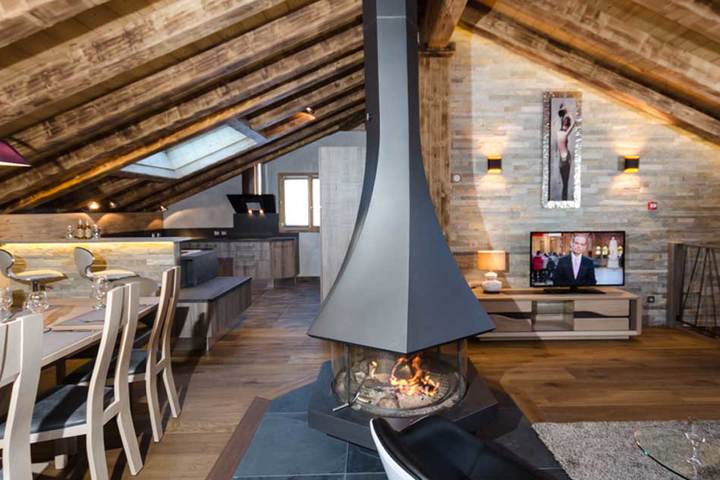 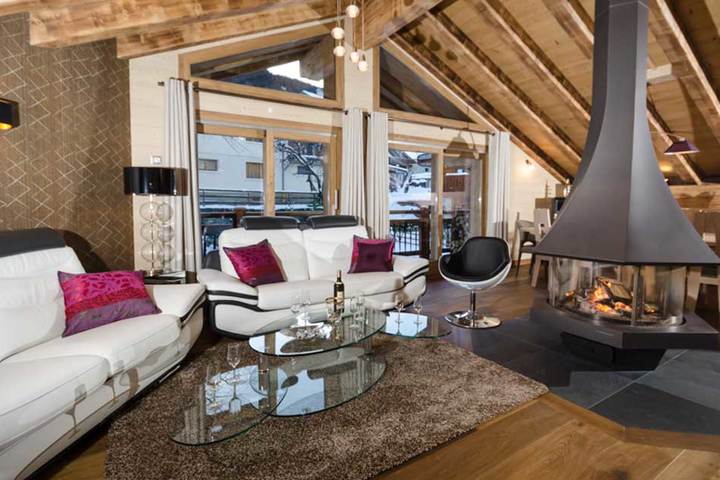 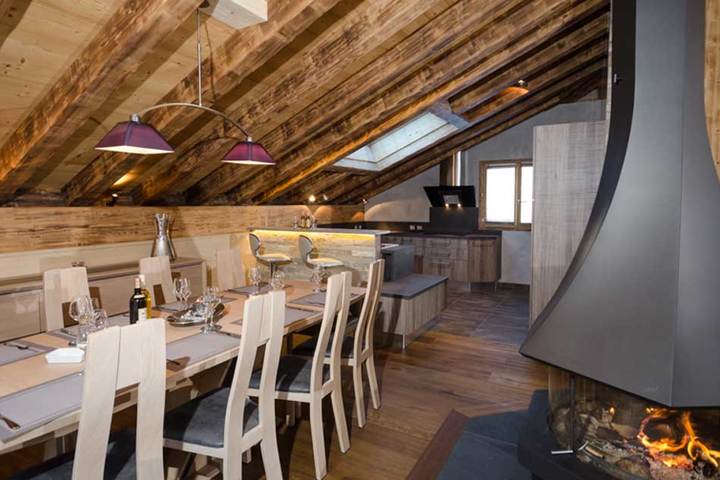 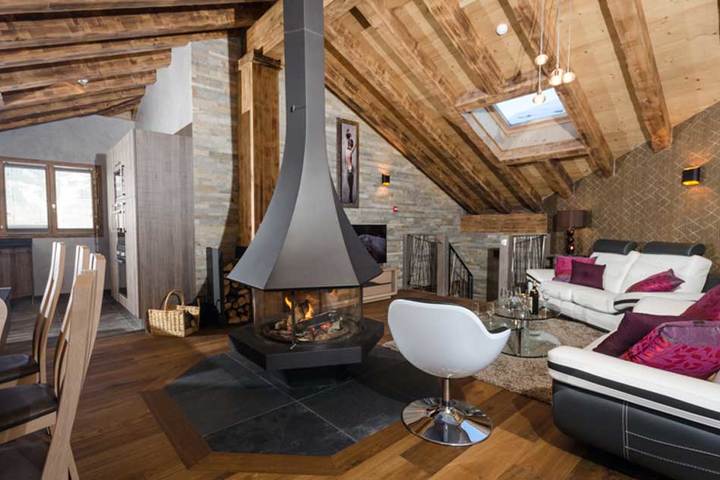 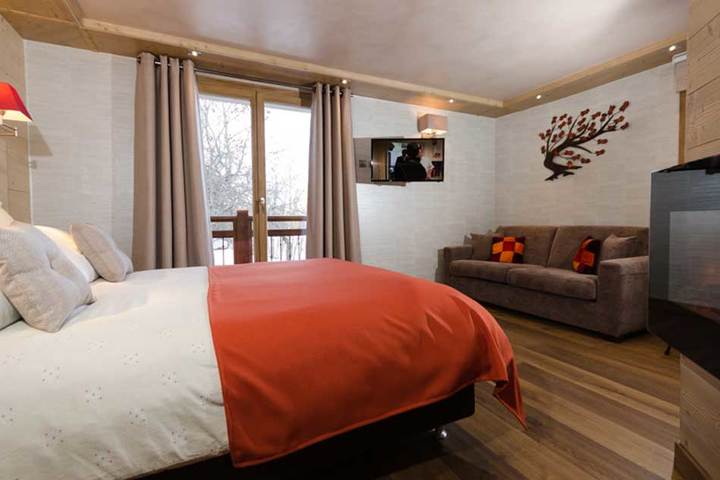 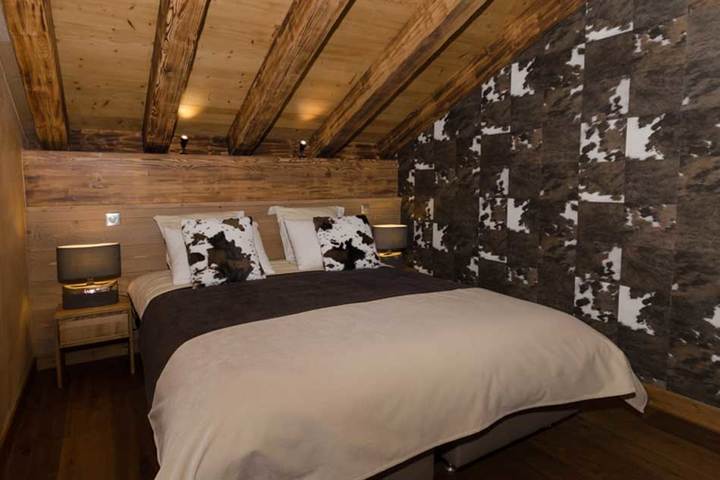 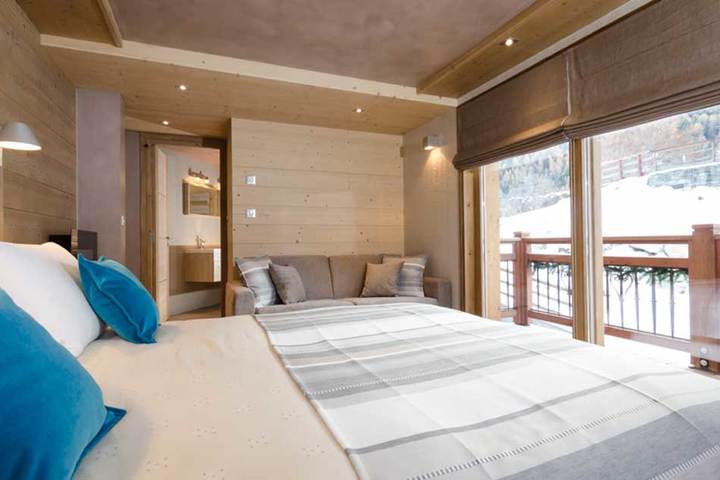 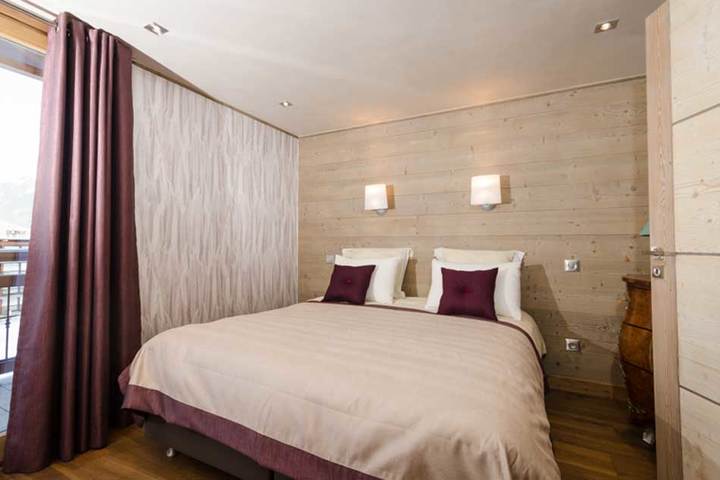 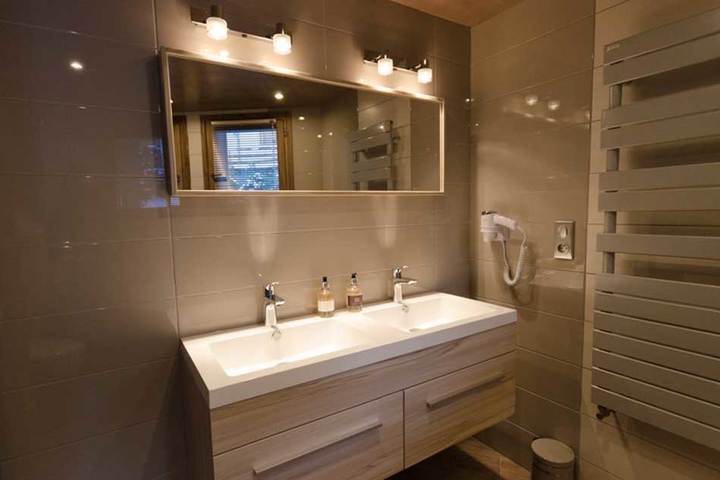 Chalet Emilie is in a prime position in Courchevel Le Praz, tucked away just 100 metres from the main bubble lift that serves the whole of the legendary 3 Valleys. It's only a short stroll into the pretty village centre with bars, restaurants; including the Michelin starred Azimut Restaurant to choose from. The narrow cobbled streets with village square make this village the most charismatic in the Courchevel area. The exterior of this stand-alone chalet is built in a traditional wooden Alpine style yet its bespoke interior set over three floors is chic, elegant and contemporary. You can ski back to within 100 metres of the chalet along a winding forest piste.

We are very pleased to be able to use the local baker for all of our bread deliveries for the chalet and in addition we also use the local butcher located in the centre of the village, so your meat and fish are of the highest quality and freshly delivered. This chalet benefits from our "Flagship" catered package.

The chalet has 4 large en-suite bedrooms, each being a twin or can be made up as double when required. Each bedroom has its own balcony from which to admire the mountain views and additionally two of the rooms benefiting from sofas. All en-suite bathrooms have fabulous high specification showers or bath.

The beautiful open plan sitting room on the first floor is decorated and furnished with tasteful yet comfortable furniture and has a contemporary central fireplace as the focal point. The sumptuous sofas make a perfect place to curl up and relax, maybe with a glass of something special. This flows through to the dining area with its large specially crafted table so guests can sit at ease and enjoy carefully prepared meals.

Chalet Emilie is somewhere rather special when combined with our dedicated chalet staff to look after you and make your stay here a truly memorable treat.

Chalet Features:
- 4 bedrooms (all of which can be doubles or twins)
- All bedrooms have an en-suite shower or bath together with toilet and washbasin
- Large open plan living and dining area
- DVD player, stereo, Satellite TV
- Wonderful central feature fireplace
- Outdoor hot tub
- Complimentary toiletries
- Spa towel and robes
- Mid-week clean with towel change (excludes spa towel and robes)
- Free WIFI
- Free parking (Limited)
- 100m from the main lift and village centre
- Heated Boot warmers and ski lockers
- Hair Dryers in all bathrooms
- Individual safe in each bedroom
- We have a great spa area featuring indoor and out door hot tubs, saunas and a steam room.. Please note that this facility is shared with the sister Chalet Jardin D'Angele next door

On our changeover day we ask you to arrive after 4pm on the changeover day and to depart before 10am on the day of departure, this is to allow a smooth transition and consideration to other guests. All of our chalets are non-smoking and shoe free so please bring slippers

Courchevel is rightfully regarded as one of the world's best ski resorts. It is located in France's massive Trois Vallees region, the largest ski area on the globe. The Trois Vallees is a truly magnificent ski area playing host to some of the best skiing in the world. With over 600 km of pistes and over 200 ski lifts, this incredible area attracts skiers and snowboarders of all abilities and offers good ski links between the Three Valleys.

Beginners and advanced skiers alike can cover a huge amount of ski terrain and then all meet up in the same mountain restaurants for a well deserved vin chaud and lunchtime raclette. The 3 Valleys is easily accessible from many international airports, including Geneva, Lyon and Chambery and is also within a good driving distance of the UK.

There are in effect four Courchevels that make up the single resort. Courchevel 1850, the highest of the cluster, is now better known for its Russian visitors and sky-high prices than for the superb skiing it offers, Courchevel 1650, 1550 and Courchevel Le Praz.

Courchevel Le Praz has a great selection of bars including our staff favourite which is Les Peupliers and restaurants including "Le Bistrot du Praz", one of the most famous restaurants in the Trois Valleys and La Table de Mon Grand Pere based in the Les Peupliers Hotel. Le Praz also has a good selection of supermarkets and shops. It is a true Savoyard village and is the prettiest of the four Courchevel villages with a quaint village square, traditional chalets and narrow cobbled streets.

Skiing back to Le Praz is beautiful with tree lined pistes down into Le Praz which are some of the prettiest runs in the Three Valleys ski area. The Jockeys' black run into Le Praz is one of the most famous runs in Europe. It is generally snow secure with north facing slopes and an extensive network of snow. If you don't want to ski back you can always catch the telecabine back to the village or there is a free ski bus service from 1850 which operates until 1:00am every night.

Dominating the hillside are the ski jumps built for the 1992 Olympics, whilst elsewhere in the village one can find a selection of over 60 shops, 8 restaurants (including the famous Bistrot du Praz) and a wealth of cosy bars in which to unwind after a day in the mountains.

The Three Valleys consists of 8 resorts Courchevel, La Tania, Brides Les Bains, Meribel, Mottaret, Les Menuires, Val Thorens and St Martin de Belleville. Although each of the resorts featured in the Three Valleys is different from one another, they all share fantastic snow records and immaculately groomed wide open pistes.

The prices for this property are listed per property (catered)

Check in is allowed on Saturday

The price includes;
• Seven nights’ accommodation
• A welcome drink of Vin Chaud with canapés on arrival
• Cooked breakfast on five mornings
• Continental self–service on two mornings
• Afternoon tea on seven afternoons
• A three course evening meal on six nights with a cheeseboard on the final night
• Quality bottled wine served with the evening meal on six nights
• Complimentary toiletries from the Bath House
• Mid-week clean
• Free WiFi & UK Satellite Television (subject to availability)
• Dedicated and helpful service from all the team
• Concierge service including:
• Arranging ski passes
• Arranging equipment rental & Lessons
• Restaurant booking on staff days off
• Arranging in chalet massages with the company "Massage Me"
• Use of hot tub/sauna (where applicable at selected times)
• Dedicated and helpful service from all the team
Notes:
- Babies under 2 are charged at £200 each if you are booking over the bedroom/chalet capacity. This includes a shared transfer, cots and highchairs. Baby food and bed linen/duvets are not provided.
Discounts & Charges:
If booking the chalet on a room by room basis (when possible), the following can apply:
- Children under 12 get a 10% discount
- If you occupy a double/twin room by yourself there is a charge the empty bed at the full rate less £100.