Over the weekend another wave of snow has hit the high altitude French resorts. A good base is getting laid down and lots of resorts are gearing up to open shortly. Over 50cm of fresh snow has fallen across a lot of the Alps. Tignes is the first French ski resort to open this season with the Double M run from the Grand Motte to Val Claret opened since Saturday 10th Oct. more snowfall over the weekend has improved conditions although visibility is poor in the resort at the moment. There has been plenty of snow in Val d’Isere and Chamonix also but these resorts are not expected to open until early December.

There has been fresh snow in the Austrian Alps too and in Tirol the ski resort of Obergurgl has already opened ahead of schedule. Solden ski resort is also open and Ischgl expects to welcome skiers and snowboarders in the next week.

The Swiss resort of Verbier has been open for over a week now and has more than a meter of snow. Cervinia in Italy also has a couple of pistes ready. The nearby resort of Laax is also partially open. In Saas Fee and Zermatt they have had over a meter of fresh powder this weekend so there are several runs open to keep early season skiers happy. 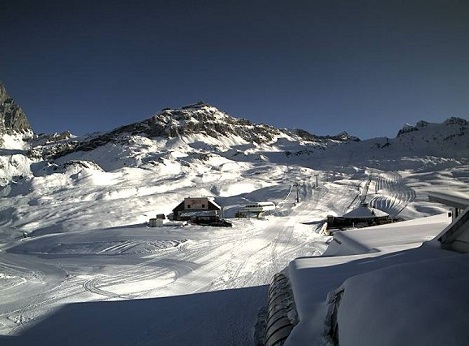 Before we all get too excited it is worth noting that it is still very early in the season and temperatures can easily rise again. That said this early snow will definitely lay down a good base on the high altitude runs.

Across the water in North America several resorts opened over the weekend. Lake Louise, Banff and Sunshine are operating in Canada and in the US the Colorado resort of Breckenridge opened for early skiers. Lots more resorts in North America are expected to open in the next couple of weeks.