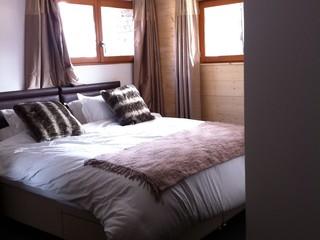 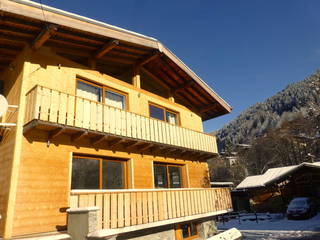 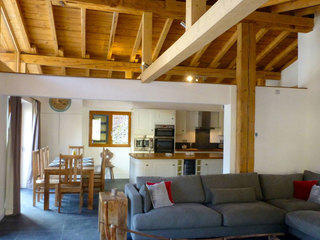 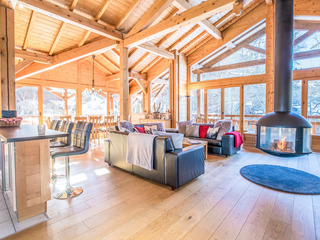 Do self-catering in style! A duplex apartment with 4 en-suite bedrooms in a quiet area of Morzine with easy access to all the Portes du Soleil ski area plus a fabulous open-plan living area. Our apartment occupies the top two floors of Chalet Lucie, a detached chalet of only 3 apartments. The ... 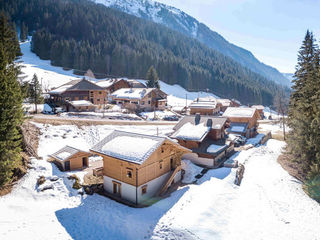 Grand Hibou features a hot tub and sleeps 14 in all ensuite bedrooms, has 3 team members to look after you and back and forth shuttle runs from the Prodain cable car even though it is only 650m. The chalet is only a short distance from the high speed cable car to snow sure Avoriaz 1800 andn the w... 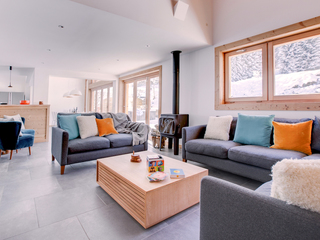 Les Trois Bonheurs is a newly renovated chalet spread over 3 floors with 5 bedrooms and 5 bathrooms and can sleep up to 11 people. This stunning chalet has a bright and contemporary feel to it due to it's tall ceilings, large windows and modern furnishings. The highlight of this chalet is the out... 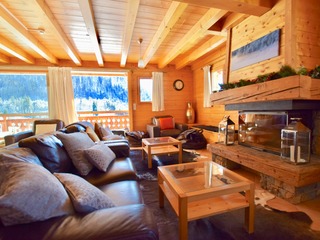 Stunning chalet in a sunny location with great mountain views!

Himalaya Lodge is our largest catered chalet, with an outdoor hot tub. It has 7 gorgeous en-suite bedrooms and can sleep up to 15 guests. The location of Himalaya Lodge is perfect. Perched on a sunny mountain side, the lodge has spectacular views over the Pleney slopes &amp; Morzine centre, which... 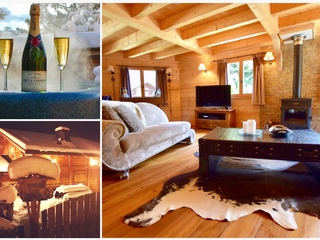 Chalet Imperial is our deluxe self catered chalet. It has 4 gorgeous bedrooms (3 doubles &amp; 1 twin room) with 2 large bathrooms and a third separate toilet. It offers luxury stays for groups of up to 8 people. This stunning chalet has a grand open plan dining/ lounge area with a feature bar, a... 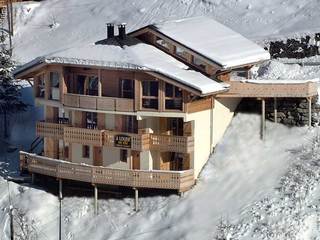 Chamois D'Or is in a prime location just seconds away from the Nyon cable car and ski slopes. The chalet has an outside hot tub perfect for easing those aching muscles after a long hard days skiing. The chalet sleeps between 12 to 14 in 6 en-suite bedrooms, there is an additional bunk bedroom wit... After a hard day on the mountain this is a wonderful chalet to come home to. The interior is cozy and the location is beautiful. This chalet is located beside the slopes of Le Pleney allowing you to ski to the chalet and is only 200 meters from the cable car to Avoriaz. The chalet is also close t... 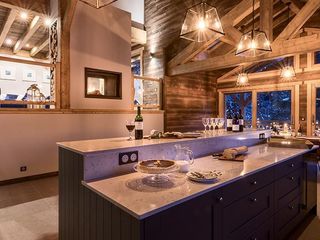 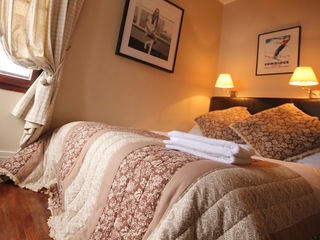 Chalet George is a superbly located catered chalet in the heart of Morzine. Situated just 240m from the lifts and the village center, this is one of the best located ski chalets in Morzine. The chalet has a large open plan lounge and dining area with a log burning fireplace that is perfect for... 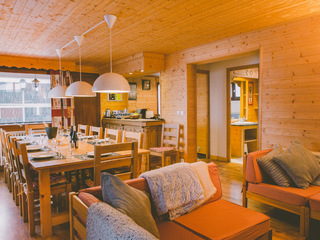 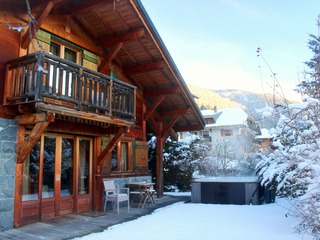 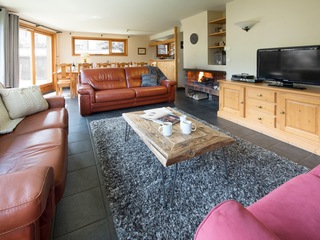 Chalet close to the ski lifts and Morzine center 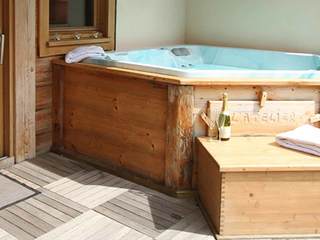 Chalet Atelier is full of character and charm. Originally it was a carpenter’s workshop and has been lovingly developed into a large chalet over four floors. There are 5 en-suite bedrooms and it is possible to make 4 bedrooms into triple rooms so it can sleep 10-13 guests. It has a large open pla... 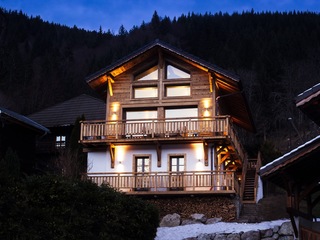 A Luxury Self Catering Chalet With Panoramic Views In Morzine

Named as one of the ‘20 coolest chalets in Europe’ by The Times, Chalet de Soie has been extensively renovated and modernised. Full of light and soft simplicity, great care and thought has been taken by the owners to make you feel comfortable and welcome. In the generous open plan living/dining r... 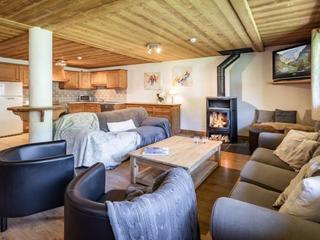 Chalet apartment in central location - only 190m from ski lifts

Chalet Le Rucher is ideally located in the heart of Morzine between 2 ski lifts giving great proximity to both sides of Portes Du Soleil. This chalet style apartment has beautiful views of the Pleney slope and also to the Super Morzine cable car. You can soak up the atmosphere of town and enjoy ... 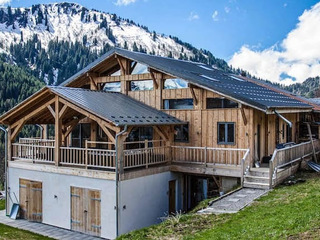 Great Traditional Chalet of 350 m² with Jacuzzzi and external Sauna

This renovated traditional Savoyard farmhouse just a few minutes from the nearest ski lift and 10 minutes from Morzine. Dating back to 1817, this stunning converted barn radiates traditional character with all the pleasures of modern luxury living. The focal point of this home from home is undoub... 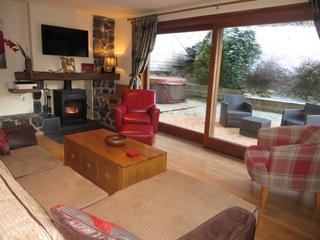 Morzine is a cute alpine town surrounded by the huge Portes du Soleil ski area. Located half way between Mont Blanc and lake Geneva its origins as a ski resort date back to the 1930’s. Its proximity to Geneva airport means that the airport transfer is just 1 hour. The town is a bustling year round location that is active with locals even outside the traditional ski season. The resort remains lively and buzzing due to a strong local community and is not “dead” out of season like some of the more modern purpose built resorts.

The resort is a picturesque mixture of traditional chalets and ski hotels. Both catered chalets and self- catered accommodation are readily available. There is a good choice of family friendly options making Morzine a particularly good option for a family ski holiday.

Being linked to the Portes du Soleil ski domain gives Morzine visitors access to over 650km of ski pistes and vertical drop from 2350m down to 1000m. Morzine itself can sometimes suffer from poor snow late in the ski season but being linked to Avoriaz guarantees you snow on the higher pistes.

Other ski areas that can be explored directly from Morzine include Les Gets, Avoriaz and Chatel. You can even pop into Switzerland if that takes your fancy and visit Champery, Les Crosets, Champoussin or Morgins.

The area offers something for all ski levels with beginners slopes close to Morzine centre, plenty of relaxed blues in Avoriaz and lots of off piste for the extreme skiers. Feel like a test then try “The Wall”.

All in all it is a perfect location for winter or summer in the Alps.

There are lots of options for ski accommodation in Morzine. Traditionally ski chalets were the most popular option but in recent years several modern apartment blocks have been introduced in the village to give a better mix of accommodation options. For family ski holidays you can choose from catered chalets in Morzine or if you prefer a lower budget why not opt for self catering ski apartments. At allChalets we list the full range of Morzine ski accommodation from the top end luxury ski chalets with indoor pools and hottubs and Jacuzzis, right down to small self catered studios which are perfect for a weekend skiing in Morzine.

The apres ski scene in Morzine.

Eating Out in Morzine

Description of the bars and restaurants in Morzine

In summer Morzine is a good base from which to explore the surrounding area. The town remains active and lively in the summer and activities include walking, mountain biking, via ferrata (metal climbing routes in the mountains), road cycling, white water rafting, kayaking and paragliding.

There is an extensive network of mountain biking trails located between Morzine and Les Gets with routes to suit all levels. The area has recently become very popular for mountain biking in the Alps and there are often local and international mountain biking competitions during the summer months.