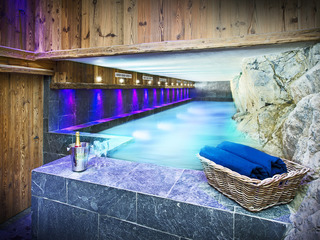 The smallest of our luxury chalets in Val d'Isère, Genepy is charming, cosy, and the perfect choice for family groups or groups of friends seeking proximity to the resort centre and excellent spa facilities. It sleeps up to 10 adults in 5 double or twin rooms, and has a further children's bunk ro...

Between 5m and 100m from shops

Located at the entrance to the resort, in the La Daille district, facing the mountain, the apartment offers an uninterrupted view over the valley and its traditional village. Between 5m and 100m from shops and restaurants and 1 km from the centre of Val d'Isère. Residence features - A friend... 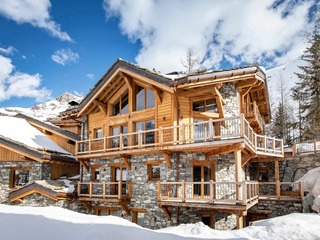 Nestled in the exclusive and wonderfully private area of Le Crêt, Chalet Machapuchare commands uninterrupted views of the entire valley, from the rocky cliffs above La Daille across pretty Val d'Isère to the glaciers and snowcapped peaks beyond. The pistes, shops and nightlife are just a three-mi...

Les Chalets de Solaise is located in the heart of Val D'Isere, close to shops, restaurants and nightlife. It has its own relaxation lounge which opens out into a good sized heated outdoor swimming pool and spa area with gym and sauna. There is a range of self catering apartments available... 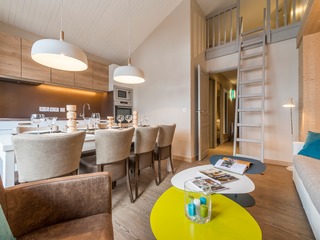 *Saturday - Saturday only* These beautiful apartments are in a 4-star residence designed in typical Savoyard style with plentiful use of wood and stone, situated in La Legettaz district of Val d’Isère. They are in located at the foot of the Solaise ski slopes, with ski in and ski out access, nex...

Combining traditionally styled luxury and comfort, this spacious duplex apartment offers warm and relaxed accommodation in a great location close to the slopes and the centre of resort. This apartment is situated on the fourth-floor of L'Aiglon residence, only 150m from the nearest piste, 50m ... 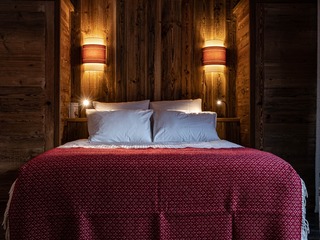 Staying in this home is to be wrapped in a cosy warmth, with each detail carefully curated for complete comfort. Brightly patterned rugs complement the dark alpine finishes, whilst warm lights and decorative cushions beckon guests into the bedrooms - two with a double bed in each, sleeping a tota... 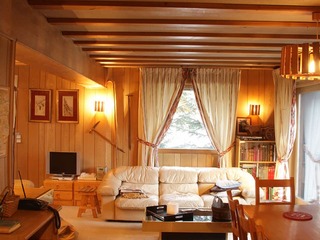 This standalone chalet is located in a quiet residential part of Val d'Isere but has convenient access to the slopes, bus stop and the resort centre. It has a real alpine feel throughout with the use of warm wood panelling, traditional furnishings and glimpses of Val d'Isere's farming history dec... 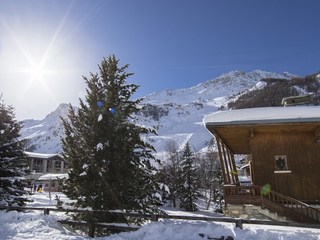 Chalet Le Cabri is located in Val D'Isere centre, very close to the ski lifts &amp; pistes. It is 200m from Bellevarde Express Ski Lift and 400m from Solaise Express Ski Lift. The chalet was newly renovated in 2017. The chalet is 140m2 and accommodates 12 people in 5 bedrooms over 2 floors. The... 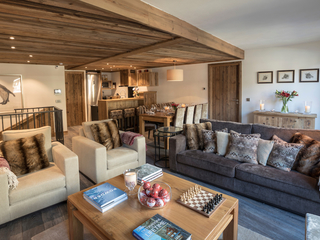 La Canadienne is a beautiful residence developed by renowned architect Jean Charles Covarel, a specialist in contemporary styled alpine architecture. This stunning apartment has been finished to a very high standard and offers modern, luxurious accommodation for up to 8 people. Set out over t... 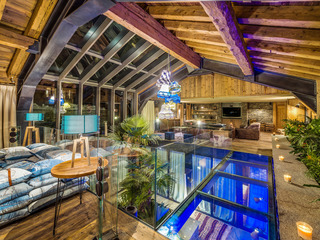 Spacious, modern, and offering unbeatable spa and games facilities, Chalet Husky is a wonderful addition to Purple Ski's portfolio of luxury chalets. Tucked away in the central 'Petit Alaska' area of Val d'Isère, a short chauffeured minibus ride from the snow front and the resort's infamous shopp... 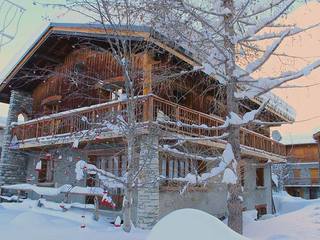 - Prime location in the beautiful and famous old village of Val d'Isere, only 3 minutes from the resort centre - One minute’s walk from the ski lifts. - Chalet sleeps 10 to 15 people, depending on whether the group uses the mezzanine levels - Al-fresco wooden sauna for après-ski relaxation - ... 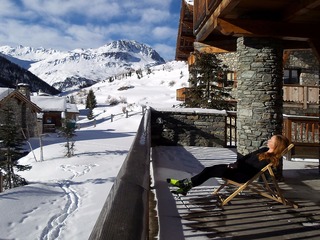 Chalet Amelie is a spacious, modern, and beautifully designed ski and snowboard chalet in Val d’Isère. The chalet is in Le Fornet, right next to both the village centre and the ski lifts and slopes. The Le Fornet cable car is situated directly in front of the chalet, as is the bus stop frequented... 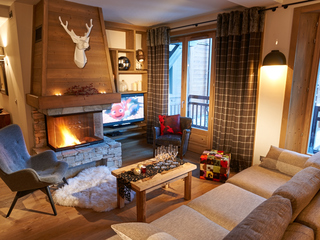 Situation on the second floor of a brilliantly located and brand new Savoyarde apartment building, it has great accommodation with four bedrooms and three bathrooms. The lovely open-plan kitchen/living/dining room has an open fireplace and doors leading to a wonderful balcony with great views on... 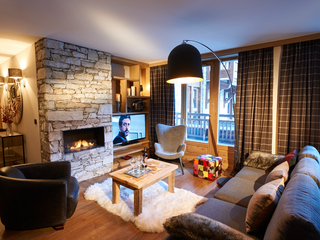 Lusitano - 8 person Chalet in the Heart of Val d'Isere

The Lusitano is a superb chalet-style apartment in a brand new interior designed Savoyarde style building right in the heart of Val d'Isere. Situated on the first floor, it has fantastic accommodation for up to 8 guests in four bedrooms, each with ensuite bath/shower rooms. The wonderful op... 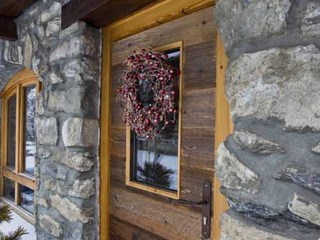 A remarkable collection of unique, boutique apartments with a service personal to you. More than a great place to stay we provide personal help and support to make the most of your precious time. A tailor made break with a special place to call home at the end of the day. Four luxury apar... 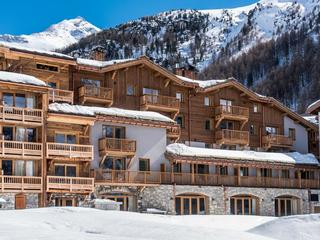 Excellent and well located 3 bed apartment for up to 6

If you’re looking for a luxurious 3 bedroom self-catered and convenient option in Val d’Isere, (other sizes available between 2 and 5 bedrooms) you’ve found it at Chalet Skadi, ideally located less than a 5 minute walk to the centre on Ave du Prariond. A ski holiday to Val d’Isere is a memory to ... 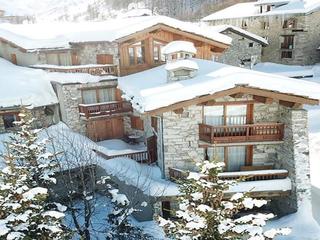 Well located, quality, 3 bed 2 bath apartment for up to 8

Chalet Marie is ideally located in central Val d'Isère, in the Le Joseray area on Rue du Joseray and is a traditional Savoyard apartment in a larger chalet, offering a self-catered 3 bedroom 2 bathroom option, with a well equipped kitchen and living area with an LCD TV with DVD player. The slopes... 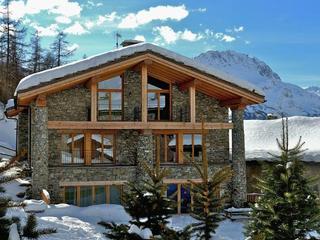 Chalet Vanoise is nestled on the edge of the mountain on the pretty tree-lined hamlet of Le Fornet, with easy access to the best snow in resort. Sleeping 12 people in five spacious and modern bedrooms, the chalet is spread over four floors and provides over 250m2 of living space. We chose Chalet ... 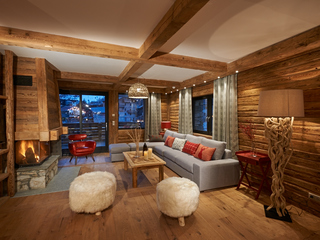 Brand new chalet, in the heart of Val d'Isere

The chalet/apartment Arran is new to our programme for the 2016/17 season and promises to offer superb accommodation for up to 8 people. It forms part of our "Scottish Isles" programme and set in the heart of Val d'Isere, provides instant access to the cosmopolitan lifestyle and incredible sk...

Val d’Isere is one of the most popular ski resorts in France. It is particularly well frequented by British skiers and the British ski championships are regularly held in Val d’Isere. The town itself is part of the Espace Killy ski area and combined with Tignes give over 300km of ski runs. Val d’Isere lies in a valley containing the 3 villages of La Daille, Val d’Isere itself and at the top of the valley Le Fornet, itself a magically little hamlet hidden deep in the mountains.

The ski area offer lots of variety. There are plenty of easy slopes for beginners, miles and miles of wide intermediate runs and then for the more adventurous there are acres and acres of off piste for free riding. There is even summer skiing on the glaciers in Tignes and above le Fornet.

On top of the great skiing facilities Val d’Isere does not disappoint in terms of après ski and non skiing activities. Being one of the most popular resorts in the world there is a huge selection of bars, restaurants, nightclubs and shops. In recent years the resort has become one of the most trendy ski resorts in France and the town center now offer designer boutiques, haute cuisine restaurant, trendy private club and glamorous boutique hotels. That aside there is still a wide choice of venues and always something to suit all tastes and budgets.

For beginner skiers one of the best locations are the easy greens off the top of the Borset Express or the wide runs in Le Fornet which are usually quieter than the rest of the ski resort . Intermediates are spoilt for choice as there are many pleasant blues and reds. If you don’t like a lot of other people around you on the pistes then it Is best to avoid the late afternoon rush back to the center of Val d’Isere.

For experts you should head for the high altitude pistes where there is almost limitless off piste and free riding. If you fancy a challenge try La Face or the Olympic run in La Daille. For off piste and powder Tignes is one of the best parts of the Espace Killy so be sure to try it out during your ski holiday in Val d’Isere.

Val d’Isere accommodation consists of a mix of stone and wood chalet type buildings that blend seamlessly with the mountains around it. The resort offers a mix of catered and self-catered chalets with a lot of the luxury chalet accommodation being located at Le Fornet just outside the resort. Le Fornet has its own gondola linking it to the main piste area and there are ski buses that run on regular intervals so you do not need to worry about access.

The town has many larger complexes of ski apartments to rent. Ski apartments in Val d’Isere tend to be self-catering accommodation but there are so many restaurants and bistro nearby that your don’t need to cater for yourself if you are too tired after your day on the slopes. At the La Daille end of the valley there are several high rise blocks of ski apartments which to be honest are not the most attractive apartments in Val d’Isere but they are far enogh out of town not to ruin the alpine atmosphere of Val d’Isere itself. La Daille also has several ski light connections to the mountain so it too is well connected in its own right. Wherever you book ski accommodation in Val d’Isere you will not be far for a ski lift.

Eating Out in Val d'Isere

Description of the bars and restaurants in Val d'Isere

Visiting Val d'Isere in summer is a great idea. If you are looking for something to get the adrenaline pumping this is the place for you. Everything from quad biking, paragliding, mountain biking and 4 x 4 driving is readily available. If that’s not really your cup of teas then you can always try some fishing in the mountain lakes or a round of golf in Tignes.