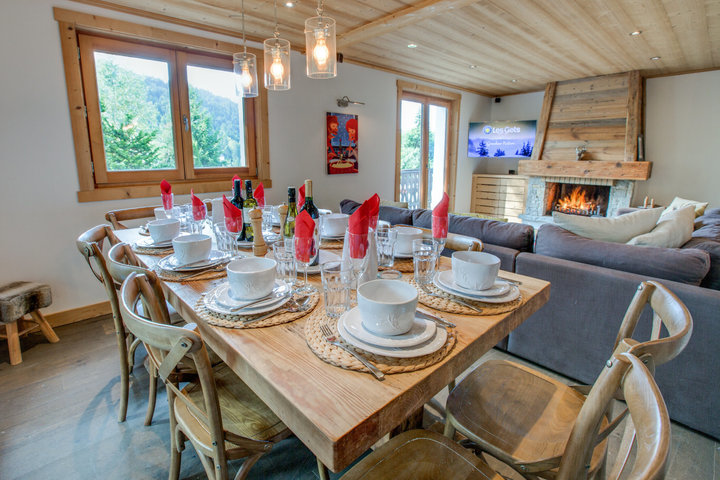 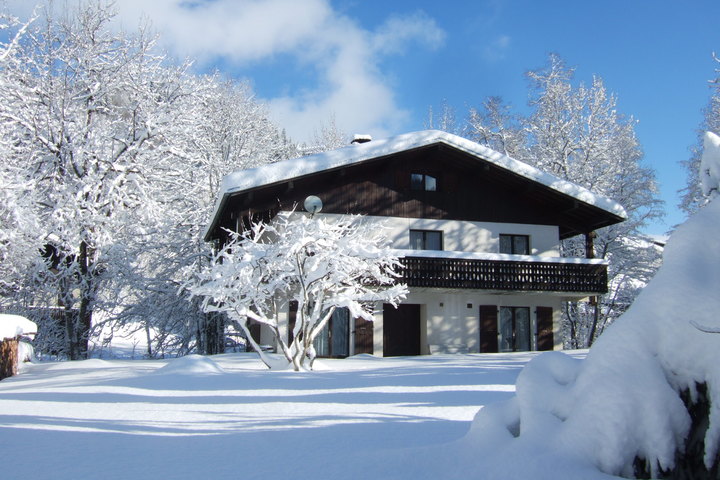 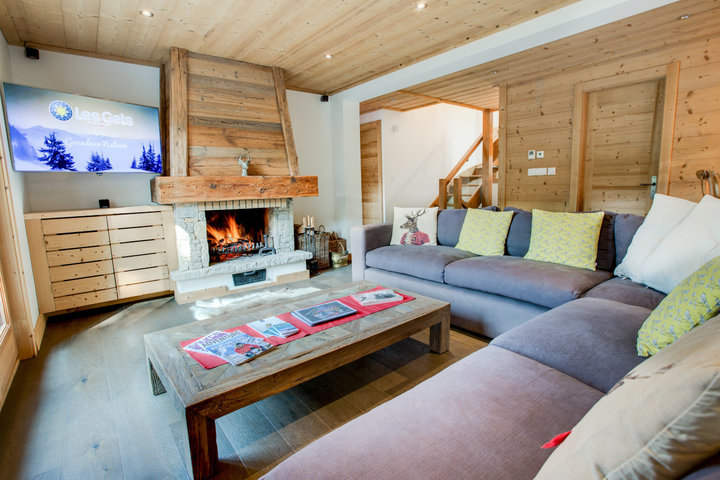 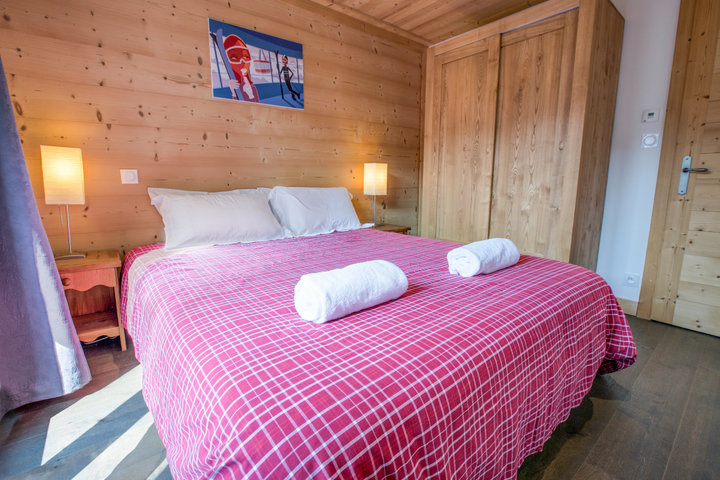 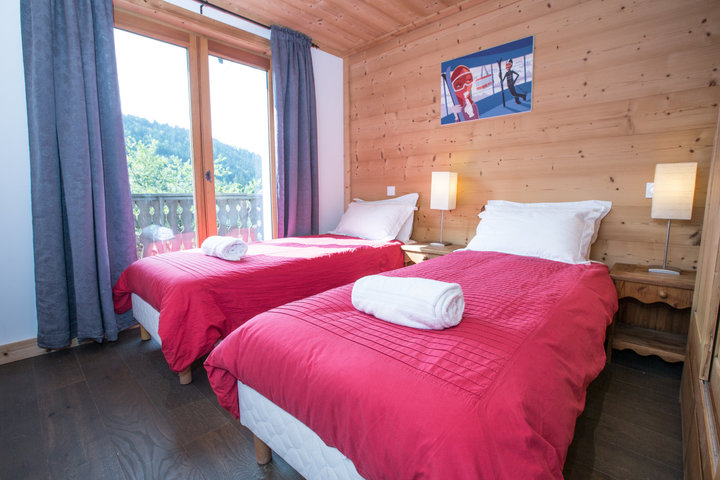 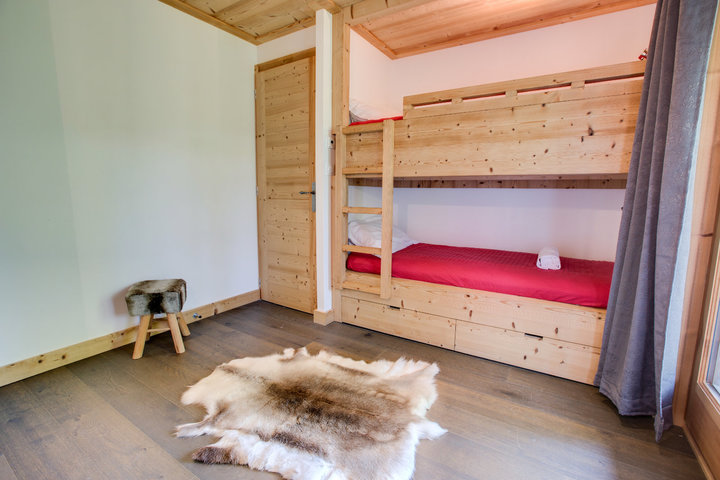 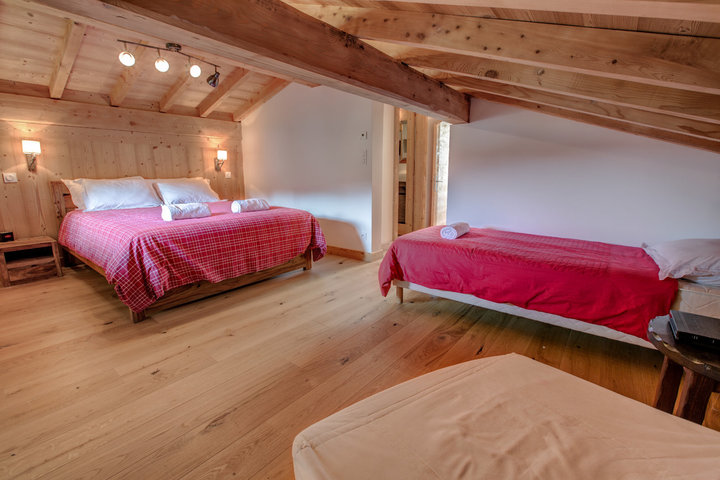 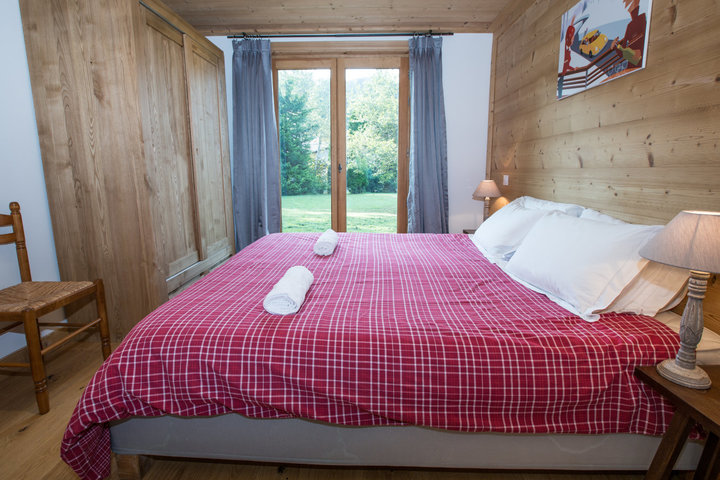 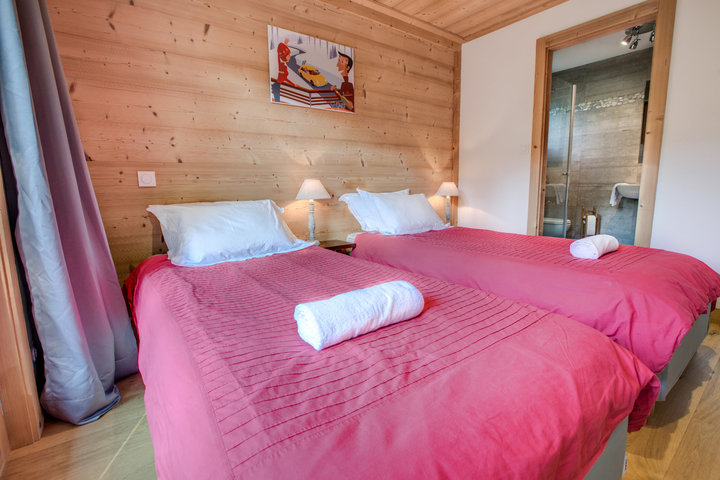 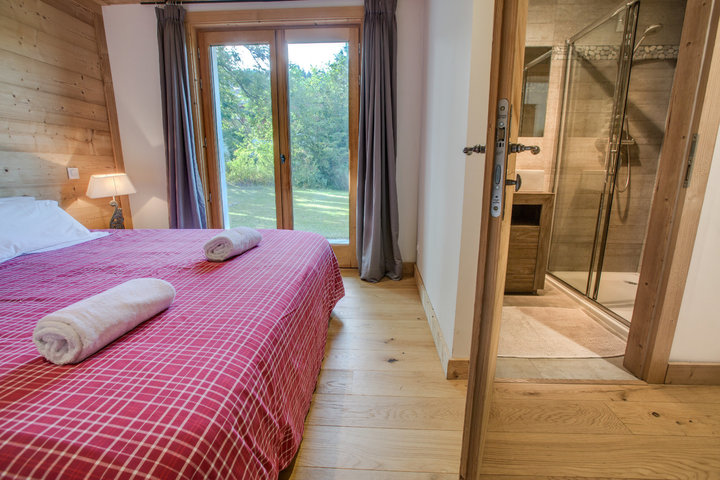 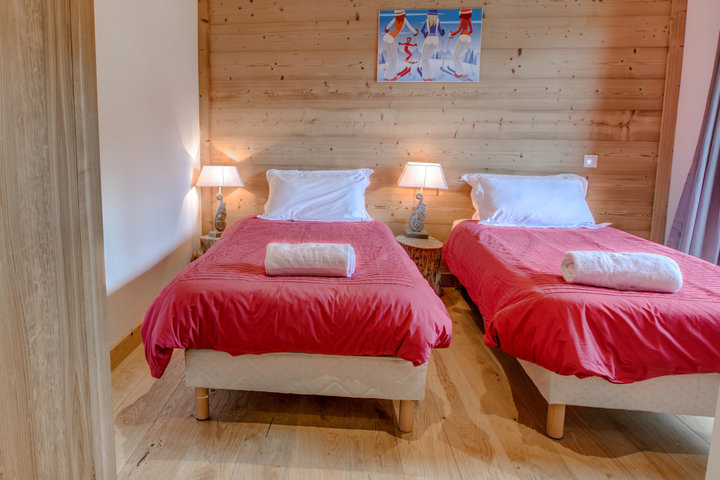 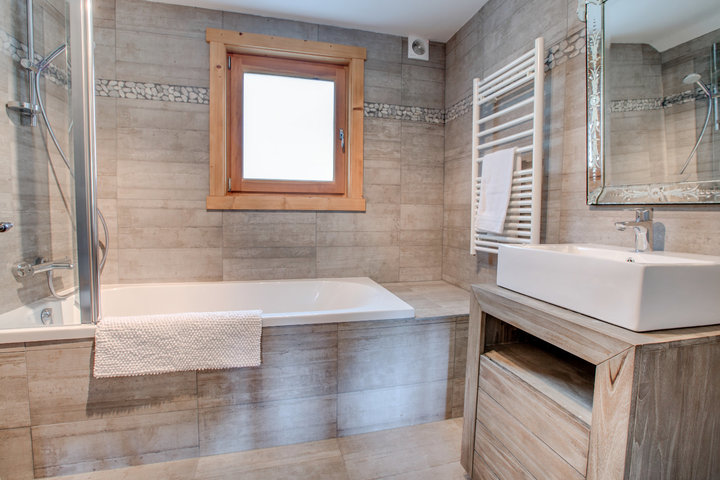 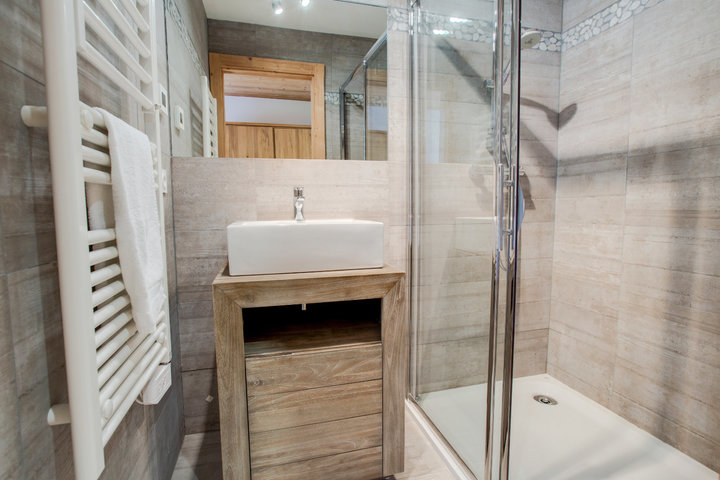 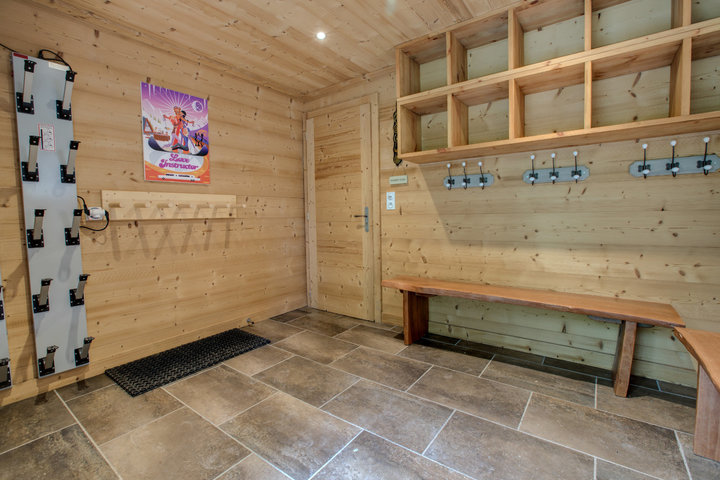 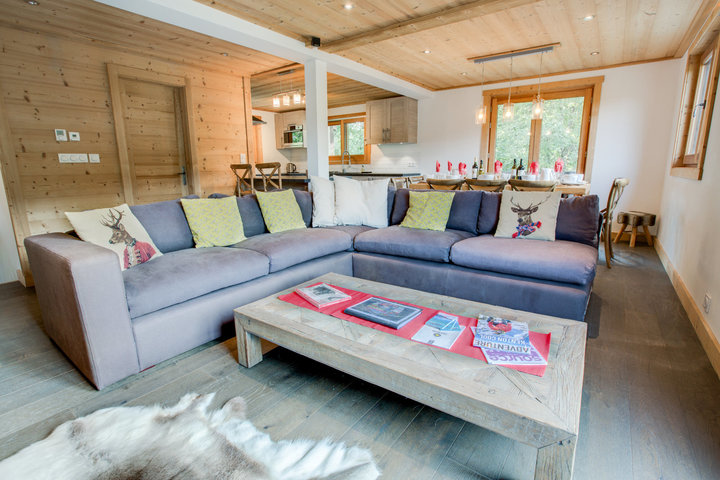 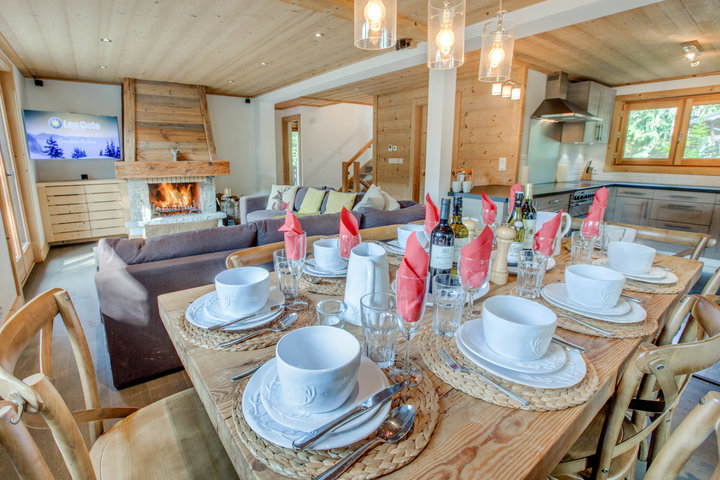 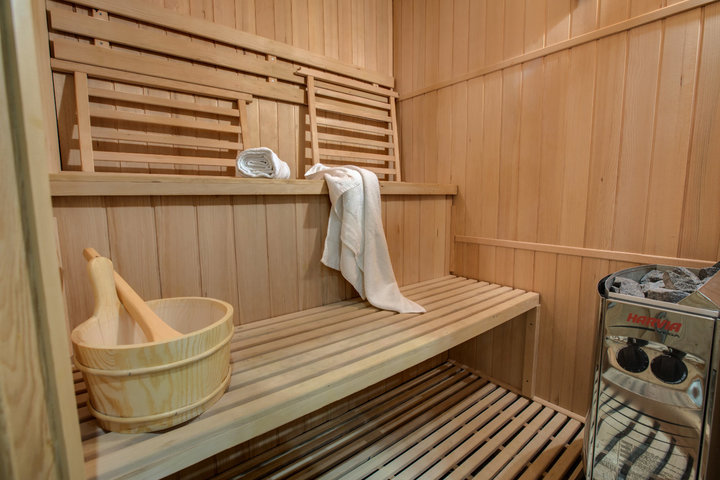 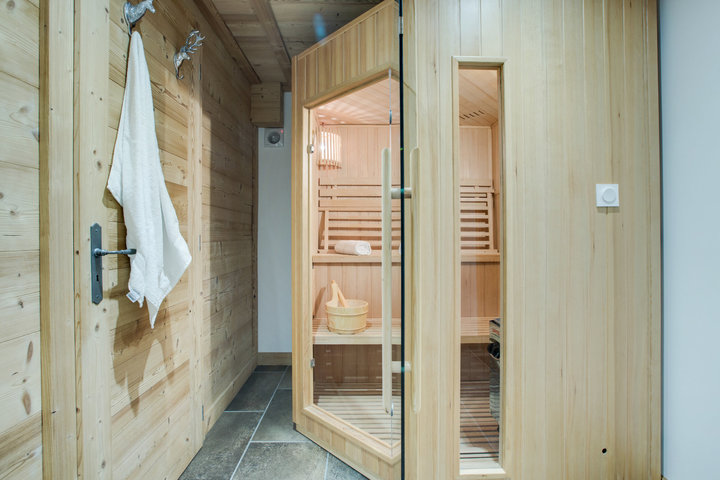 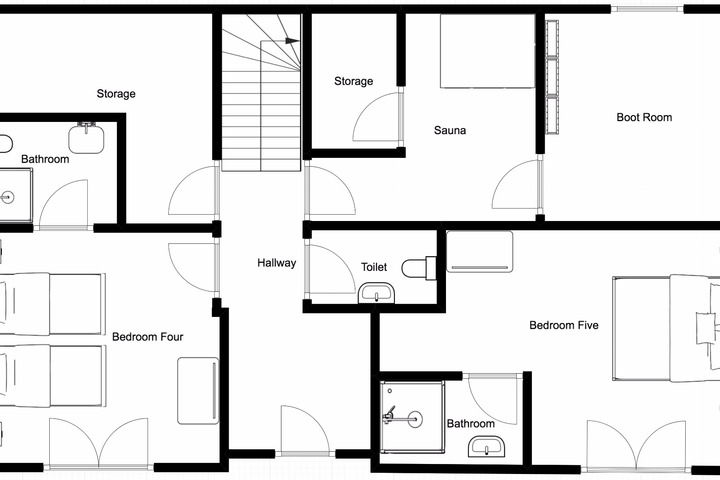 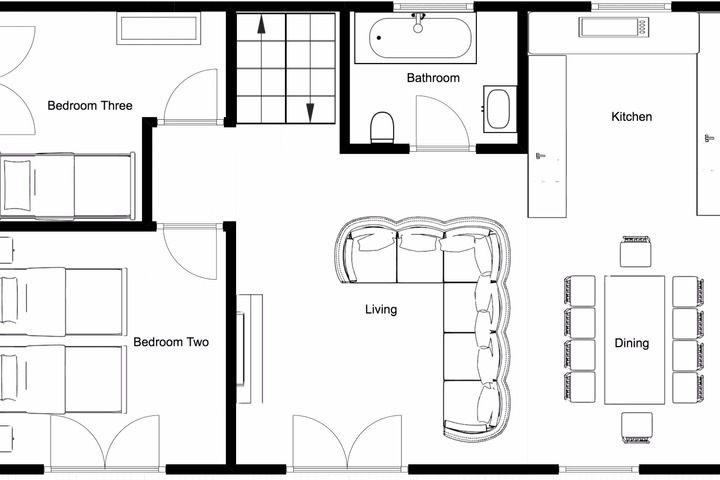 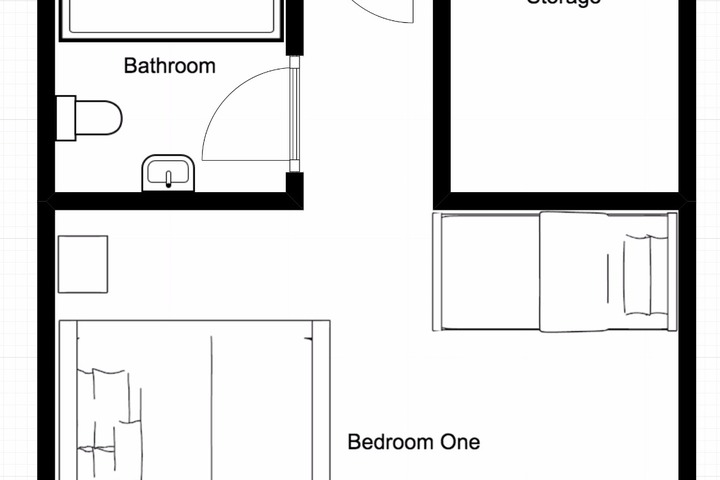 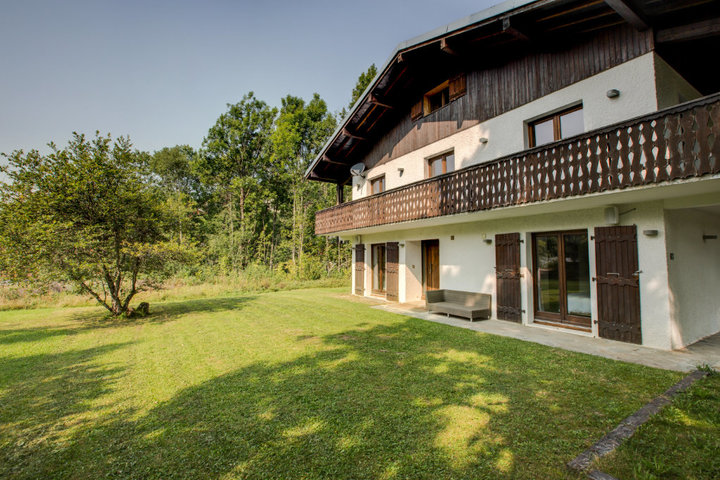 Located very close to the ski pistes, ski lift and designated tobogganing area, Chalet Fram offers real luxuries with its large private gardens, sauna and beautiful wood decor. Recently fully renovated inside and out, The Chalet offers five beautiful mostly ensuite bedrooms with the option of double or twin bed setup. There is a large log fire in the open plan lounge, dining and kitchen area with amazing panoramic views from the patio windows. The bars, shops, restaurants, cinema and ice skating rink are just a short 8 minute walk from the Chalet.

Chalet Fram is located in an area of Les Gets called Les Pesses. You can see below on the map in section G4 how close the Chalet is to the ski slopes, lifts and the village centre. From the Chalet door it is only 100 metres to the Perrier Express Six Man Chairlift that takes you up to the Les Gets bowl which is linked to the whole area with a good selection of Blue, Red and Black runs. If you want to ski back to the Chalet then you can take either a red run from the top called Melezes or take the blue run down to La Turche and cut across onto the last section of the red Melezes run. To get to the village centre and the main Chavanne lift which is where most of the ski schools meet, it takes eight minutes walking, or you can hop on the free bus that stops right outside Chalet Fram and goes direct to the centre taking just 2 minutes. In the evening if you want to venture out for an Aprés beer or two, you need to walk as the bus stops around 6pm. If you have young children or need extra assistance then we have a minibus which we can use to run you around.

With Lake Geneva on one side and Mont Blanc on the other, Les Gets (1172m – 2002m) retains its Savoyard mountain village soul and its heritage that brims with historic and cultural riches. The name of the village refers to the channels (gittes or giettes in the local dialect) in the forests which were used to send logs rapidly down the hillside during logging work. Les Getois (the locals) retain a deeply-held love for their Savoyard heritage and this makes Les Gets such a uniquely attractive and friendly place to visit.

Les Gets opened its first chairlift in 1938 and started to develop tourism . The French Ski School ESF originated in Les Gets with its first ski school opening here in 1940. The quality and diversity of the skiing in Les Gets is enough to bring a smile to anyone’s face. With its Family Fun attitude, children are treated like kings in Les Gets! And thanks to its wonderful location, access to the rest of the Portes du Soleil couldn’t be easier – or quicker.

The Grand Cry Territory in Les Gets is a ski and play area themed on native American Indians. It features two slopes with raised bends and a series of bumps. There are friendly ‘native-entertainers’ who offer to face-paint all young visitors and a Wigwam with traditional games and music.

In Les Gets, skiers set off from the heart of the village for treelined slopes and snow meadows with sumptuous views and panoramas to take your breath away. Whether you’re an advanced skier or a beginner, in Les Gets you’ll have all the fun you could ever want, and all space you need, to let your skis run and run.

The Les Gets and Morzine Ski Area

Half Board Catered Holidays:
INCLUDED in the cost of your holiday

Half Board Catered Holidays:
NOT INCLUDED in the cost of your holiday
* We can help arrange or book these items
Flights
Transfers from Geneva *
Equipment hire *
Lift passes *
Packed lunch *
Massage Therapy *
Insurance

If, on the day before arrival, any of the circumstances outlined below apply to your booked dates, and this results in your booking being cancelled, then you will be entitled to either a 100% refund of your accommodation payments or a 100% credit note depending on the applicable circumstances.