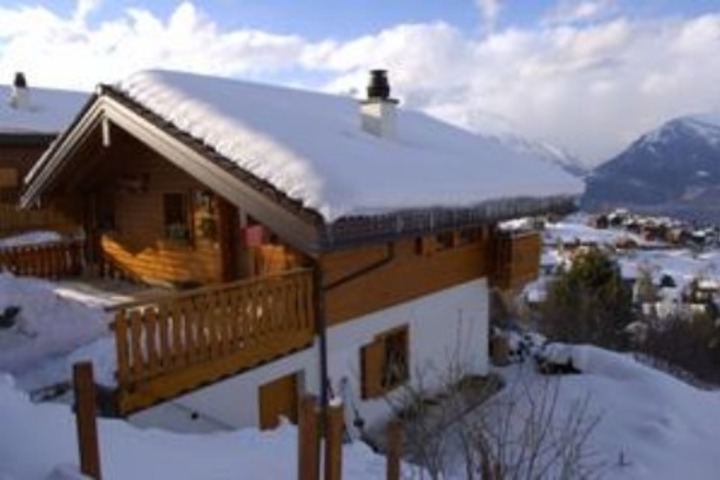 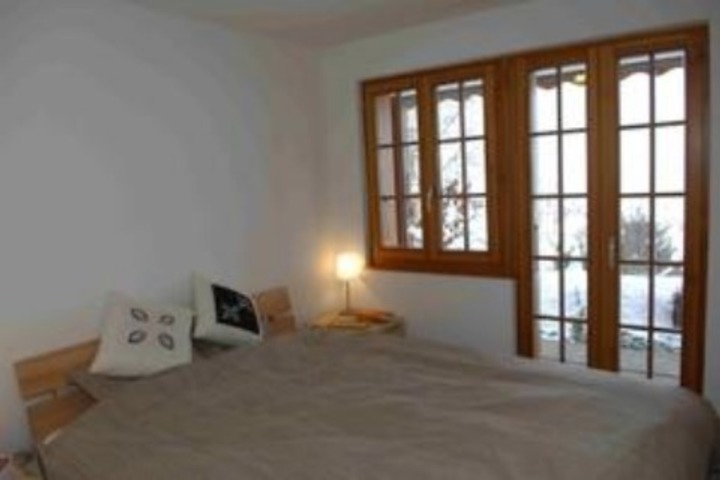 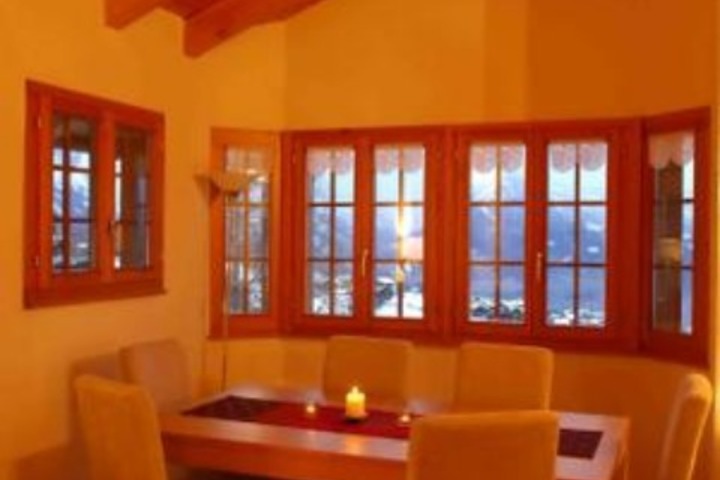 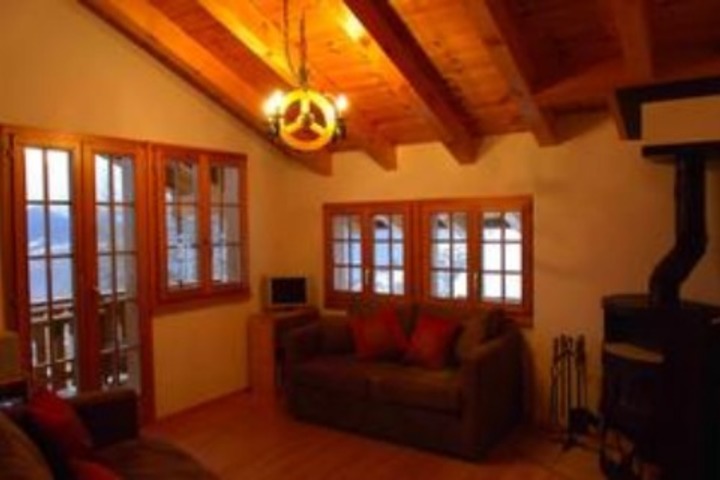 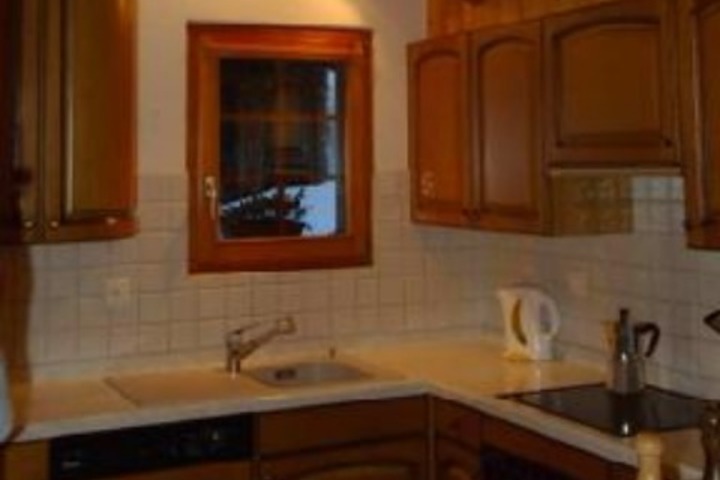 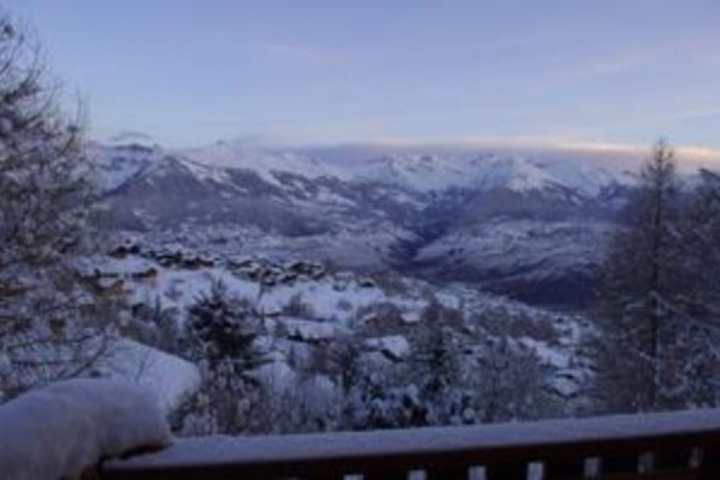 Chalet le Joyau is a luxury 3-bedroom chalet with breathtaking views overlooking the Rhone valley. It is situated in the centre of Nendaz, just 10 minutes from the ski lifts and only 2 hours from Geneva airport. The chalet is offered on either a self-catered basis.

Chalet le Joyau's accommodation is on two floors, with a separate entrance on each level. It is furnished to the highest standards in an unfussy, contemporary style and is generously equipped with everything you could need for a relaxing stay.
For those looking for the ultimate in luxury, the chalet is also available on a catered basis. We have teamed up with a local chef and are able to offer a fully tailored service ranging from family meals through to haute cuisine. Menus and prices are available on request.
Entering from the front garden, the entrance hall and cloakroom lead into a big open plan sitting/dining room and fully fitted kitchen, with windows and balconies on three sides offering stunning views over the Rhone Valley. Downstairs are the three bedrooms and main bathroom as well as the large locale storage area - perfect for skis and boots and with its own access to the garden and the great outdoors.

Sleeps: 6
Number of bathrooms: 1
The chalet is not available for shared groups

Most people head to the Alps in Winter because of the snow, but the people who live here know that the mountains can be equally rewarding throughout the year.
For skiers and boarders the 4 Vallees offers over 400km of marked runs - as well as plenty of unmarked stuff for the experts and mentalists.
For walking and mountain biking the opportunities are virtually limitless, with the lift network operating in July and August.

With 92 different lifts serving 412 km of marked runs (and a wealth of off-piste), there's plenty in the 4 Vallees to keep skiers and boarders of all abilities occupied for many a season. The more demanding terrain is in the southern part of the ski area, which is as easily accessible from Nendaz as it is from its more famous neighbour, Verbier. The un-pisted itinerary runs from Mont-Fort (3330m) and Mont-GelÃ©, and the Tortin and Gentianes routes, all demand respect from the experienced skier.
To the north are the gentler, groomed pistes above Veysonnaz and Thyon - although the 1km vertical descent down the red from EthÃ©rolla to Mayens-De-L'Ours - including the world cup run "La Piste de l'Ours" - would be testing without a break.
Nendaz itself sits in the centre of this outstanding ski area, and has swift links to the neighbouring valleys via the Tracouet gondola, just ten minutes walk from the chalet. There is also a regular free shuttle bus service between Nendaz and Siviez.

Nendaz is an ideal location for mountain biking and offers tracks for all levels in a glorious setting. You can use the lift systems to give your mountain bike a chance to really deserve its name. Novices as well as confirmed sportsmen/women can find an itinerary suited to their level. for those looking for aa challenge the Tour de Mont Fort is a 48km route which provides the opportunity to enjoy the spectacular scenery of the Nendaz, Verbier and La Tzoumaz ski areas, combining glaciers and alpine meadows in the tour.
For those who want to watch the action, the Grand Raid passes through Nendaz. with its 132km and a variation in altitude of 4600m, the Grand Raid is the longest maountain bike race in the world. With more than 4000 participants, including some of the best cyclists in this field, the race leaves from Verbier and passes though Nendaz en route, attracting many spectators every year who gather along the route.

f there isn't snow on the ground there's still plenty to do and see in the mountains around Nendaz. From the top of Mont-Fort down to the bottom of the Rhone valley are countless miles of paths covering the full range of Alpine terrain from high mountain glacier to gentle meadow.
Some of the best walking is along the network of bisses. Built by the farmers of the Valais to bring water down to the dry lower slopes, these irrigation channels date back as early as 1435, and their accompanying paths criss-cross the mountainside, offering outstanding walks as well as an insight into how people have lived in the region for centuries.

There are a number of thermal spas within easy driving access of Nendaz, open all year round. The closest are at Saillon, a dramatic medieval fortress town in the valley beneath Nendaz: www.bainsdesaillon.ch. Also close to Nendaz is the boutique ski and spa of Ovronnaz, above Saillon, on the north side of the Rhone Valley: www.thermalp.ch.
The Valais boasts the highest altitude vineyards in Europe, some 1100m above sea level. Vines are grown in terraces along steep valley walls right down to the Rhone river plain. Vines have been ciltivated here since Roman times and the wide variations in microclimate and soils allow for a huge range of grape varieties to be grown. Many of the local vingerons are open to wine tasting sessions. in addition, there are frequent events at which local wines are showcased, for example the "Marche Nendard" (Nendaz Market) held every Wednesday afternoon in the summer months.