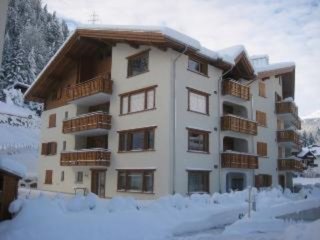 Our chalet apartment in the heart of Klosters, Switzerland (with Sauna) offers luxurious and comfortable accommodation with everything you could possibly want for a fantastic holiday. It is a true home from home, stylishly and beautifully furnished and equipped in an excellent location. Enjoy rom...

KLOSTERS SC CHALET WITH OWN SAUNA. WALK TO SKILIFTS and TOWN

Chalet Rhaetia was built in 2003 in wood in the traditional style as a family holiday home. A sauna and steam room was added in 20011. It is therefore equipped to a much higher standard than ordinary self-catering accommodation. It has been awarded a "Four Star Luxury" rating by the local Tourist...

Klosters is located at 1200m altitude in the Swiss Alps. Klosters is a traditional alpine village with beautiful Swiss chalet type architecture and a friendly and welcoming atmosphere. Klosters ski resort is linked to the Davos ski ares giving a combined total of 310km of ski runs.

Klosters offers skiing and snow boarding at all levels with amazing tree lined runs included some 50km of cross country ski trails. Klosters is long been associated with royalty and offer the perfect location for a ski holiday in Switzerland. It is particularly suited to family ski holidays as the village is small and there are plenty of pistes for intermediate skiers and snowboarders.

The Klosters ski resort began life as a monastery in the 13th century. This is where the name “cloisters” comes from. The village remains very traditional and offers and exclusive location of anyone looking for a chalet holiday away from prying eyes. The village remains lively through the year and has around 3500 permanent residents.

Most of the ski accommodation in Klosters is in the form of luxury ski chalets. A lot of the chalets in Klosters come full catered with all the luxuries you would expect from a high class ski resort. Features such as ski-in ski-out, haute cuisine, private guides and indoor pools are regularly on offer in chalets in Klosters.

The apres ski scene in Klosters.

Eating Out in Klosters

Description of the bars and restaurants in Klosters

There is no shortage of summer activities in Klosters. Paragliding is a very popular and spectacular activity. Tandem paragliding is on hand for beginners. Other options for your summer in Klosters include walking and hiking, golfing or tennis. Klosters also offer many luxurious spa centers where you can pamper yourself all day long. Of course the scenery in Klosters is as amazing in the summer as in the winter.