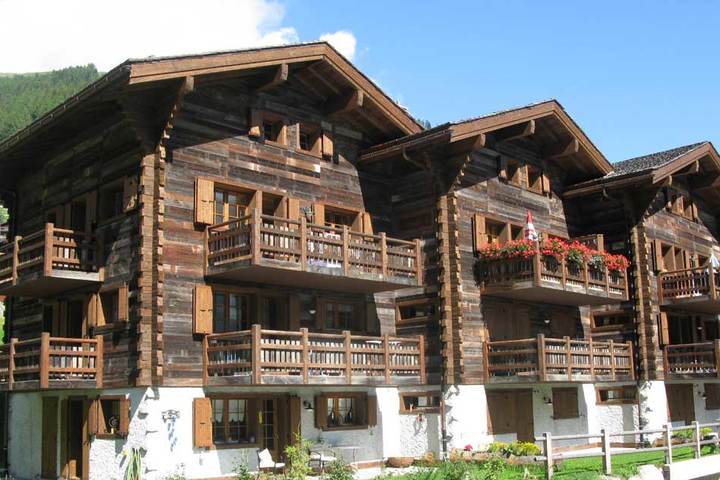 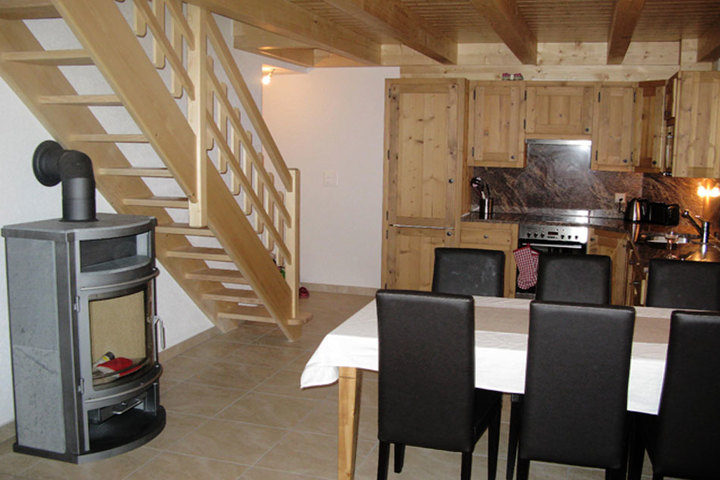 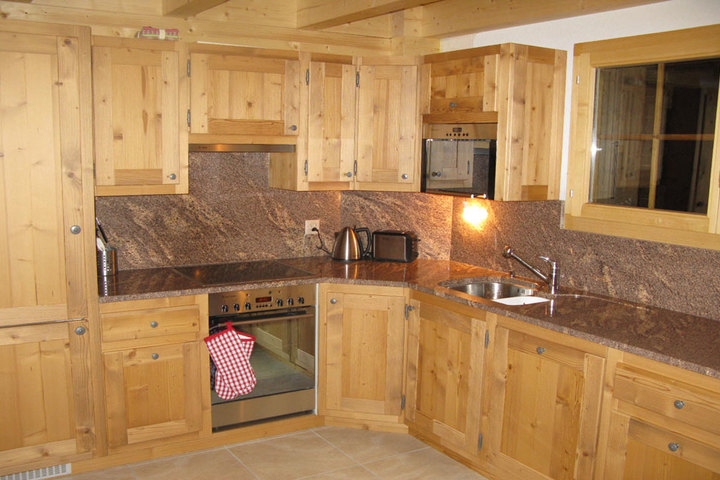 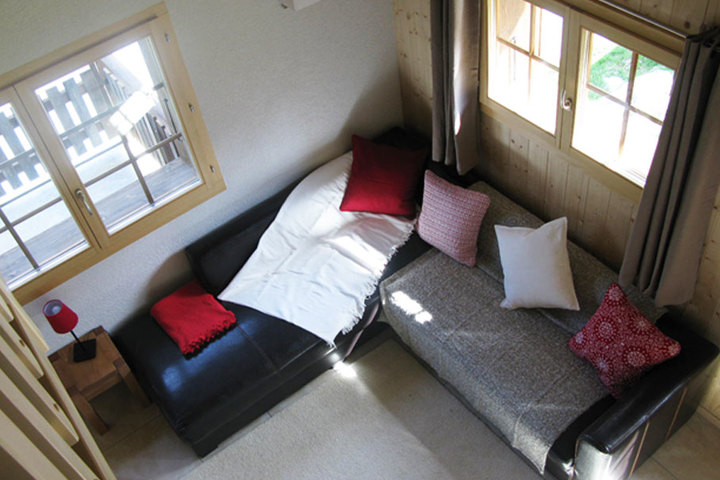 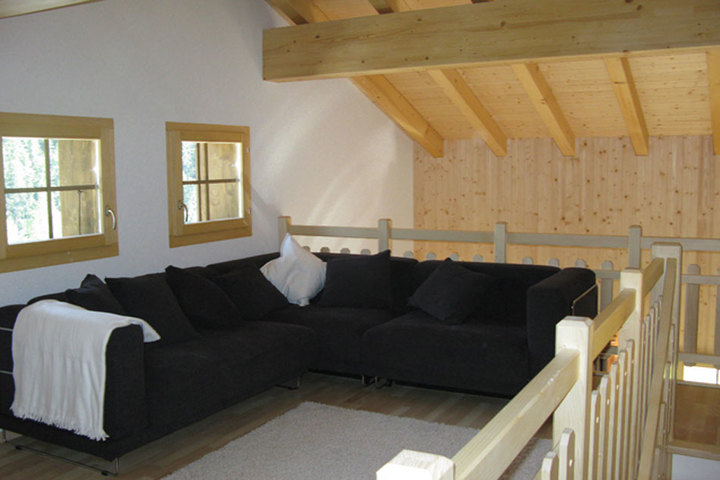 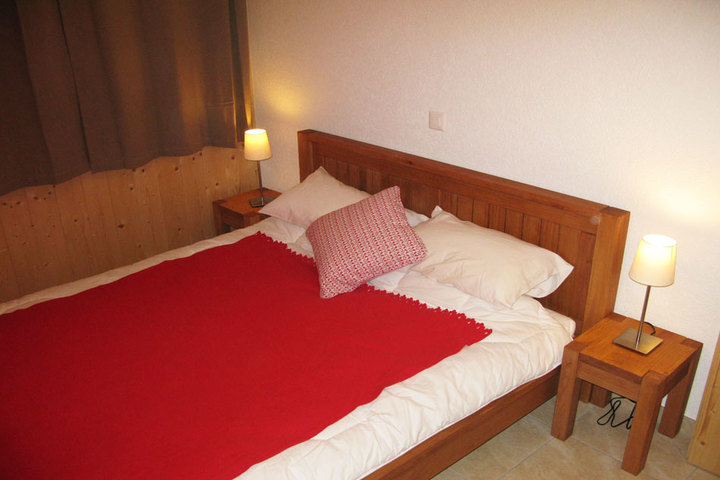 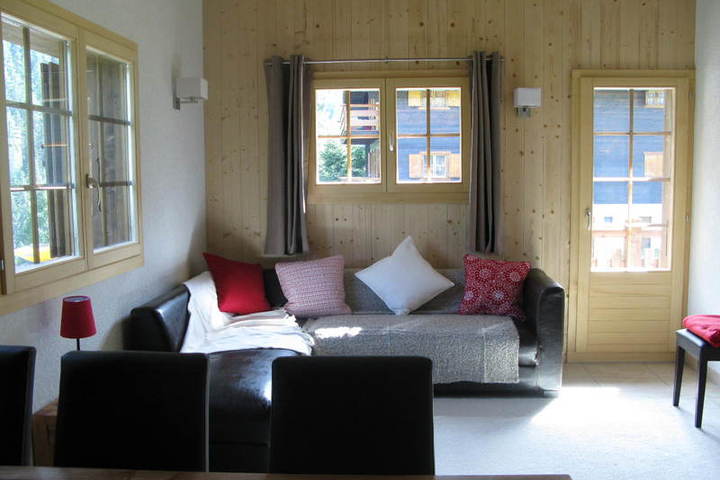 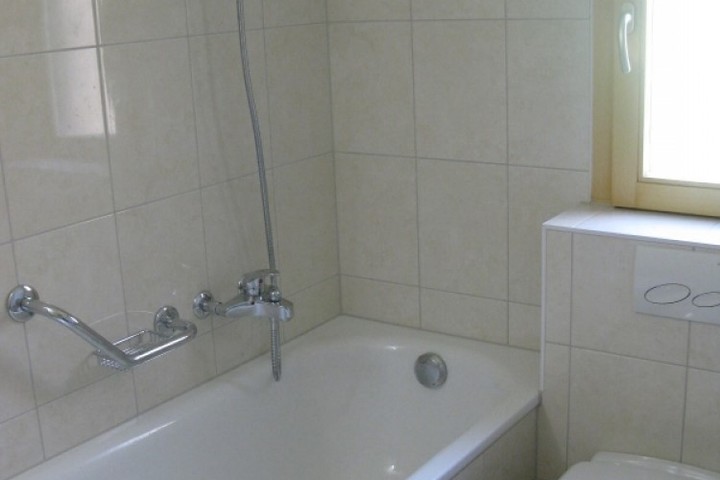 This is a stunning large luxury top floor duplex chalet apartment with 4 bedrooms. Finished externally in traditional wood style but with a contemporary feel inside this is a great apartment for a family ski holiday or a group of friends. It is only 200 metres away from the main gondola in the charming ski resort of Grimentz. The apartment is cosy and comfortable with a log wood burner and high quality finishing throughout.

On our changeover day we ask you to arrive after 4pm on the changeover day and to depart before 10am on the day of departure, this is to allow a smooth transition and consideration to other guests.

For our self-catered chalet apartments we can now offer a great range of extra services which are provided by Valet d'Anniviers, a local company, run by a British couple based in Grimentz. These services include:
- Breakfast delivered every morning.
- Delivery of a large range of homemade fresh and frozen meals (as many or as few as required), including vegetarian and childrens options. On request, vegan and other diets can be catered for as well.
- A flexible catered service where your breakfast is delivered each morning and at the same time a two course meal can be delivered for the evening.
- In house dining (similar to our catered chalets)
- Delivery of a welcome pack
- And much more - just ask!

Mountain Heaven provide self-catered chalets in Grimentz and when destined for the breathtaking majesty that is the Swiss Alps, skiing in Grimentz is an absolute must. Please note that a cateres service is though available in our self catered apartments if required.

Click on the links to find out more about self-catered ski chalets in Grimentz.

If you like ancient, quiet, totally unspoilt mountain villages together with a modern lift system then this is the place for you. In addition to the piste skiing the area is famous for its fabulous off piste skiing and its mountain touring. For magnificent views just off one the pistes in Grimentz there is a stunning 360 degree panoramic view of the Imperial Crown - five 4000m peaks - Weisshorn, Zinalrothorn, Obergabelhorn, Dent-Blanche and the Matterhorn. The village itself has tiny cobbled streets and in some places they are so narrow that the roofs of the chalets almost touch each other in the middle.

Grimentz has many accolades and has been described by Where to Ski and Snowboard as "Europe's best-kept secret" and an "undiscovered gem". As Where to Ski and Snowboard says "get there fast before it has time to catch up with the 21st century! It has also recently been featured in the Ski and Board Magazine and many others. New for the 2013/14 ski season is the wonderful cable car that links Grimentz to Zinal.

The best après ski bar is Chez Florioz which is located at the bottom of the slopes in Grimentz; this has good music, serves very nice food and is always packed straight after skiing. There two pubs; Domino and Le County (which has a pool table and table football ) together with one disco - Disco Shaddock open until 3am.

There are a number of excellent restaurants we particularly recommend Meleze which has an excellent selection with a great hot rock or Fondue Chinos (both not oil) with endless meat, salad, chips and sauces together with a great ambience. In addition there is the Restaurant Alpina that serves good oven baked beef with sauces; Arlequin that serves good pizzas, Becs-de-Bosson, Claire Fontaione which is directly in the centre of the old village and serves a wide variety of crepes and finally perhaps one of our favourites Restaurant Moiry with an old world feel with ancient paintings of the famous fighting cows of the valley and an open oven that's really cosy at night.

What's included in the rental prices?
- The apartment for the duration of your holiday
- All utilities e.g. electricity and water
- All bed linen and towels
- A final clean (except the kitchen area)
- All local tourist taxes
- Discounted equipment hire
- A lift pass collection and delivery service (when pre-ordered) - The services of our in-resort staff that can help you with any queries or problems that you may have
- Ski lockers
- Free local parking
- Cots and Highchairs (must be pre-booked)-

For our self-catered chalet apartments we can now offer a great range of extra services which are provided by a company called Valet D'Anniviers which is owned by an English company and is based in Grimentz, these services include:
- Delivery of homemade pre-prepared / frozen meals
- A semi catered service where your breakfast is deivered each morning and at the same time a three course meal is delivered for the evening
- In house dining (similar to our catered chalets)
- Delivery of a welcome pack
- Your shopping all done for you!
- Packed lunches arranged and delivered
- Gift Hampers
- Raclette and Fondue evenings
- Childrens parties
- Restaurant booking service (free of charge)
- Baby sitting
- And many more services!