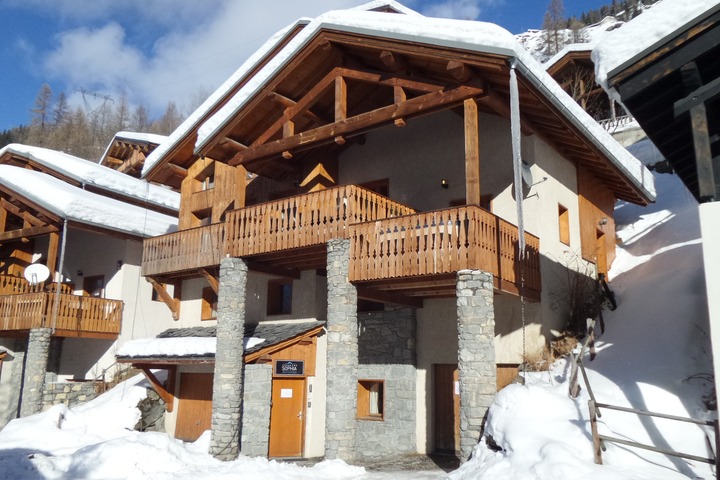 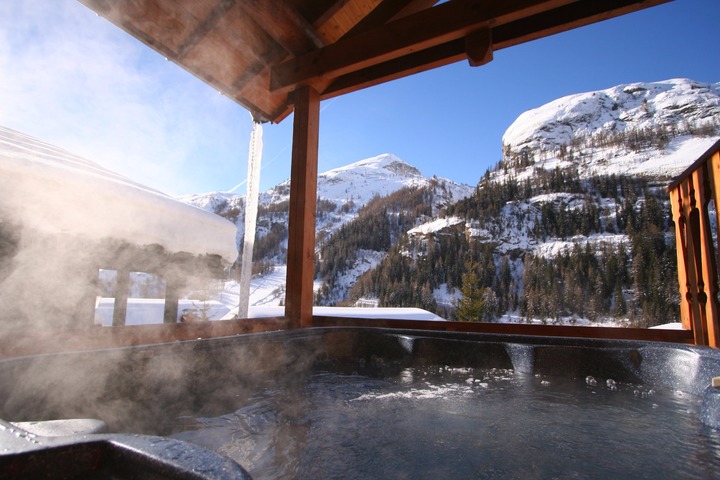 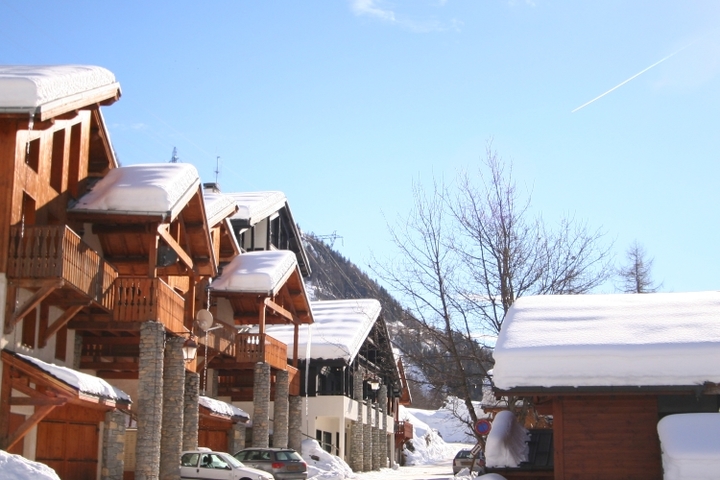 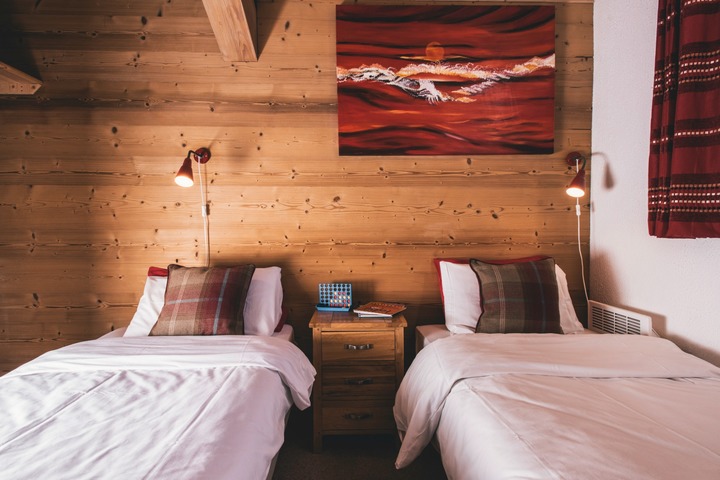 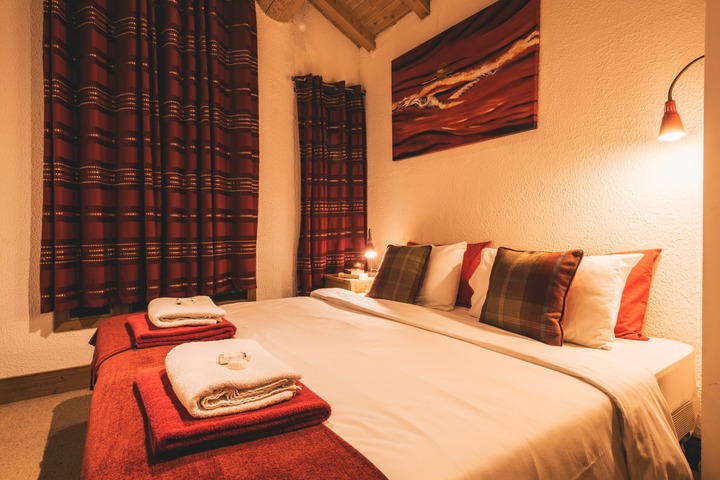 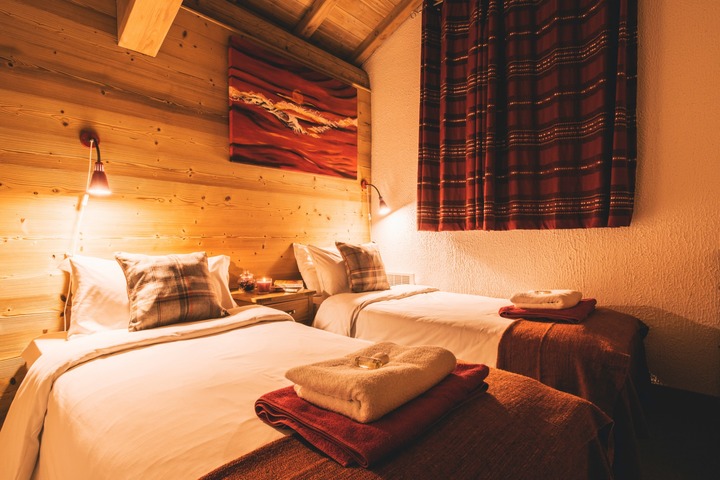 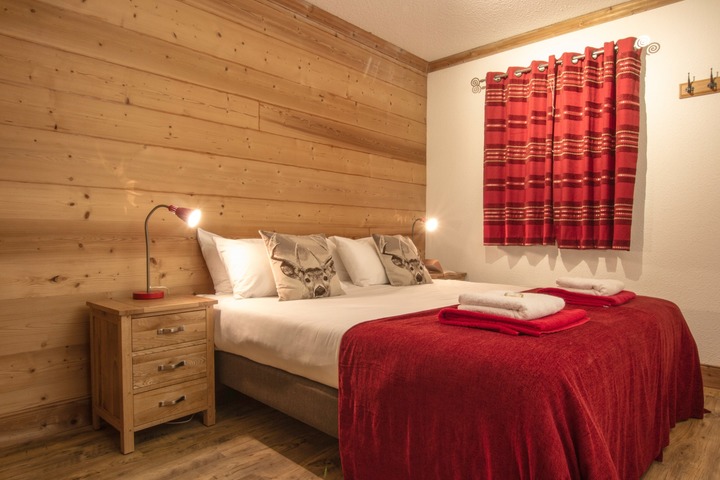 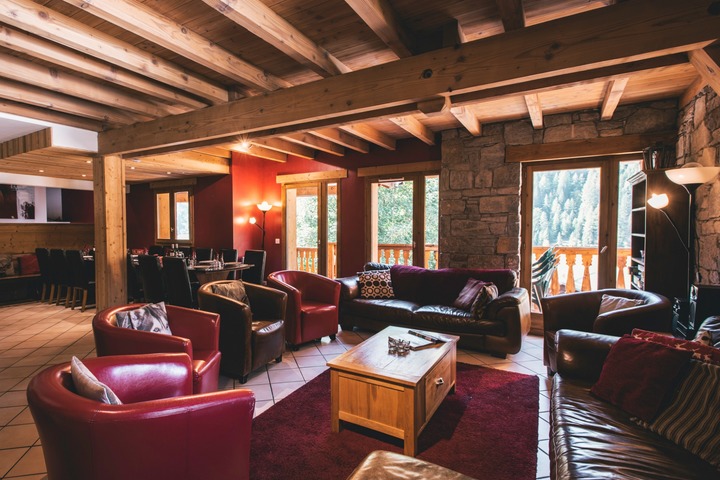 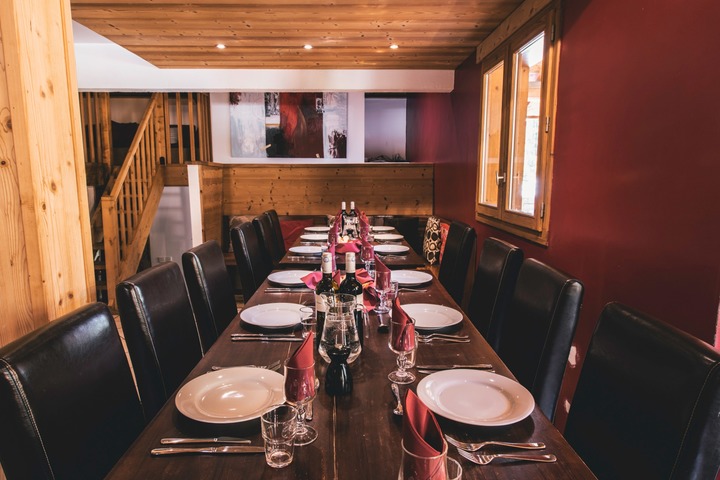 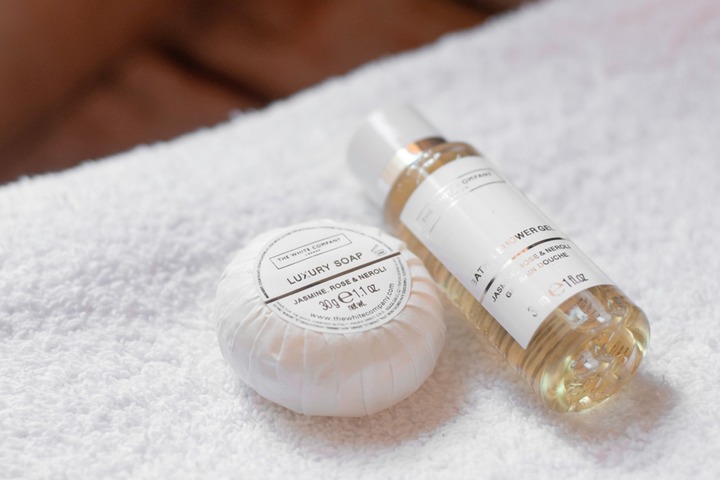 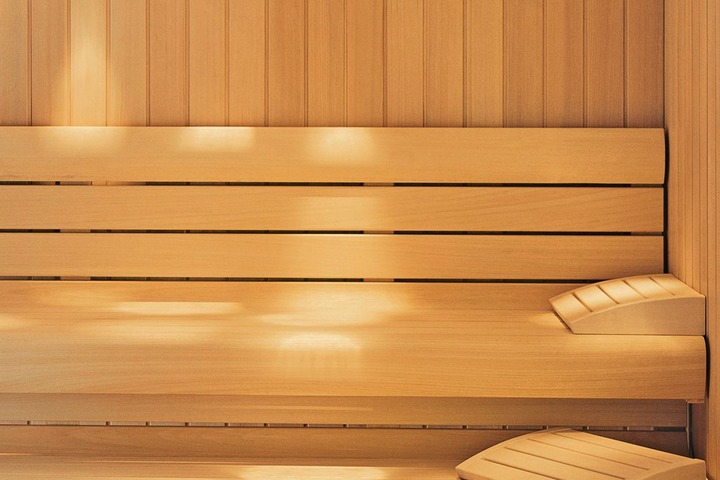 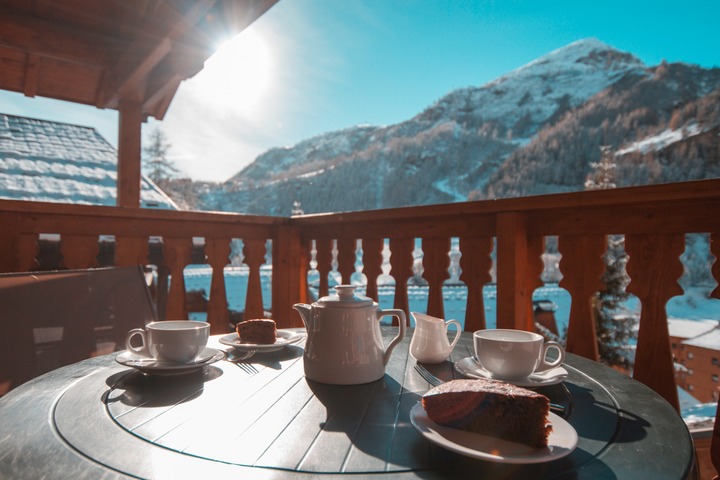 Chalet Isabella is a spacious and modern 17-person chalet laid out over four floors in Tignes les Brévières with panoramic mountain views. The premium accommodation is located in the village’s Hauts des Brévières area, just a one-minute walk to the funicular-style lift that links you to the main lift station, piste, bars and restaurants.

Isabella benefits from both a traditional Scandinavian-style wooden sauna and a hot tub on the balcony overlooking the picture-perfect snowy village, lake and mountains beyond – perfect for soothing your muscles after a long day on the slopes! There is ample storage for skis and boards complete with heated boot warmers, so you know your equipment will be ready for action the following day.

With its wood and stone finish, the stylish living/dining area has an abundance of character and a sociable, open-plan layout. Guests can use the fully equipped kitchen, indulge in delicious meals at the large banqueting table, relax in front of the crackling fire and admire the idyllic views from the communal balcony. Meanwhile, a separate cosy television snug offers UK satellite TV, and DVD facilities with a selection of movies, games consoles and a choice of board games.

We know how to make your holiday special. Each season we assemble a team of talented professionals who pride themselves on their exceptional service and are dedicated to creating the perfect alpine ambiance.

We look forward to welcoming you to Isabella.

Chalet Catering:
During your stay you will be looked after by your personal chalet hosts who will cook meals, clean the accommodation and ensure you have an enjoyable stay. The menu is a full four-course evening meal, including a cheeseboard to finish, with complimentary French quality wine served throughout dinner on 5 nights of the week, with a 2-course Savayorde meal on one night. A hearty continental breakfast is served every day, with hot options on 5 mornings. Afternoon tea awaits you in the chalet every day apart from chalet day off.

Tignes is a Mecca for any winter sports enthusiast. 300 kms of marked piste, 90 lifts and a World famous ski area linking into Val D’Isere with 2 glaciers and one of the largest verticals in the world from 1550m right up to 3550m. Snow is guaranteed from mid October right through to mid May. We have two chalets in Tignes Les Breviere - just 100m from the new lift linking directly to the Sache Gondola out of the village. Chalets Davie and Trudie are two identical chalets situated next door to each other. Both chalets have eight rooms and are catered on a H/B basis, seven days a week.

Tignes lies at the top of the Tarentaise valley and is made up of five hamlets, Tignes les Breviere, Tignes le Bois, Tignes le Lavacet, Tignes le Lac and Tignes Val Claret. The ski area is linked with Val d Isere to form the famous Espace Killy ski area. The hamlets of Le Bois, Lavacet, le Lac and Val Claret began their lives when the Tarentaise river was dammed flooded the old village of Tignes and forming the Lac Chevail. A number of evicted villagers began to develop the Tignes that we know today and with the help of the famous French skier Jean Claude Killy linked it with the neighbouring village of Val d Isere to form the extensive ski area of the Espace Killy. The Ski area provides for skiers of all abilities, with some 350km of marked pistes, glacier skiing, and numerous bowls and untracked areas for the off piste lovers. It really is an area that you can return to each year and find new areas to ski.

Tignes is a vibrant Alpine resort; there are plenty of restaurants, bars, shops to keep the non-skiers of the party happy. Other ‘activities’ going on in the village include horse drawn sleighs, ten pin bowling, ice skating, fitness centre, cinemas, swimming pool, ice diving and numerous way marked walks around the villages

Apres ski in Tignes is as long and hard as you want it to be. The Alpaka Lodge has its own bar and is one of the main focal points in Tignes Le Lac, while just up the road is the Loop Bar which hosts a number of live bands and events weekly. There are free Navettes which link Le Lac and Val Claret and run regularly until midnight enabling the party goers within the groups to enjoy the Vie Bar and any number of clubs situated in Val Claret. Tignes is also re known for its new-year celebrations with a live DJ and spectacular fireworks to greet the New Year in. It also hosts the prestigious X Games for the next five years, an event not to be missed.

Although Tignes is quite a large resort, the lifts system is well linked and all skiers should be able to move around the area with just the use of the lifts. However for the non-skiers or the weary skiers, both Tignes and Val d Isere has an excellent free bus service which links the ski areas.
A Bus - the A bus runs from Les Bois up to the Tourist office in the centre of Tignes le Lac.
B Bus - the B bus goes from the Tourist office in Le Lac and runs around the lake in Tignes up to the lifts at the base of the Grand Motte in Val Claret.
N Bus – The N bus runs from the little hamlet of La Daille right the way up the valley to the Fornet Hamlet, connecting all the main lift access in the Val d Isere valley.

The Espace Killy ski area is popular with both skiers and boarders. The area caters well for all abilities, with some 350 km of marked pistes ranging from gentle blues up to technical black runs. The area links the villages of Tignes and Val d Isere and sits in the Vanois national park, giving stunning views of large undisturbed natural beauty. The area is also high enough to guarantee good snow conditions.

Beginners
Beginners are well catered for with nursery slopes in Les Breviere, Le Lac and Val Claret. All these nursery slopes have the added advantage of being served with ski lifts that are free to use, enabling beginners to gain all the necessary skills at no cost before heading off to try the numerous blues in the area. Once the basic skills have been mastered then the Palafour chairlift whisks beginners away into an area with numerous blue runs to practice on. These blues either wind their way gently back into le Lac, or for the more adventurous there are blue runs which link into both Val Claret and Le Breviere from this chairlift.

Intermediates
The Espace Killy ski area has a wide variety of marked pistes that will keep intermediates happy each day of their holiday. Spend a few days exploring the areas of the Grand Motte, Toviere and L’Aiguille Percee, areas which all surround the hamlets of Tignes. Runs such as Double M of the glacier and cyclamen from the L’Aiguille Percee are not to be missed. For those intermediates wishing to step out of their comfort zone, perhaps tick off the blacks of Trolles and Sache.
The Solaise and Fornet bowls above Val d’Isere also offer the intermediate both excellent and challenging skiing. Enjoy skiing on the second glacier in the area with its wide range of blues and red runs.

Advanced
The Espace Killy area has enough of both challenging pistes and off piste bowls to keep even the most adventurous advanced skier/boarders happy. Blacks such as Leisse, situated on the Grand Motte glacier, the face, coming of the Rocher de Bellevarde into Val d’Isere and the mogul field known as silene will keep you amused for hours. For those of you who enjoy off piste why not enjoy the easily accessible bowls of Vallon de la Sache or the Fornet bowls. However to really experience some of the untracked off piste areas why not hire an off piste guide from Top Ski.

Rates are for 7 nights per person including half board.

In the event of cancellation of your booking due to Covid-19 you will be entitled to either a cash refund minus the non-refundable deposit or a 100% refund credit note including the deposit depending on the circumstances outlined below.

Valid reasons that will lead to the utilisation of this Covid-19 cancellation policy are limited to: