Chalet Shanti - at the foot of the slopes, just 100m to the lifts, jacuzzi 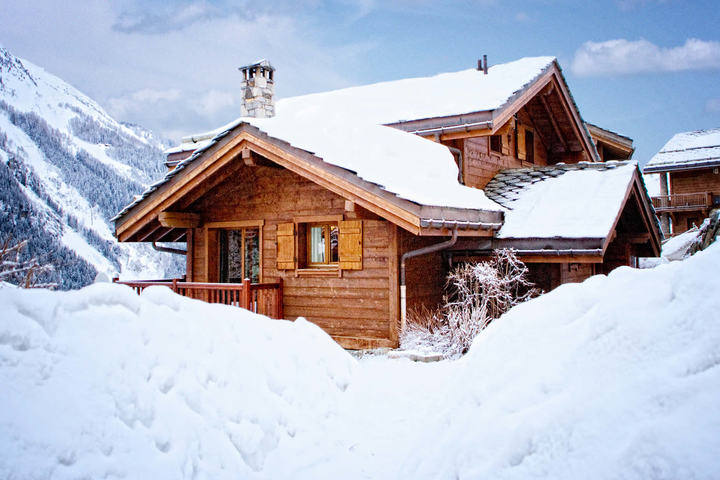 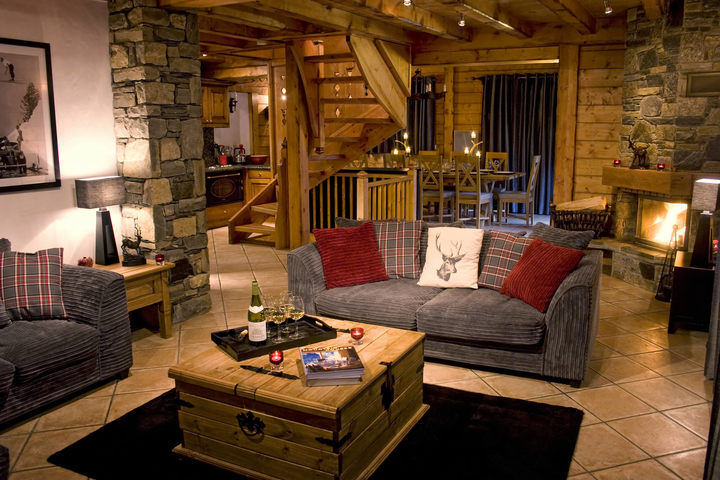 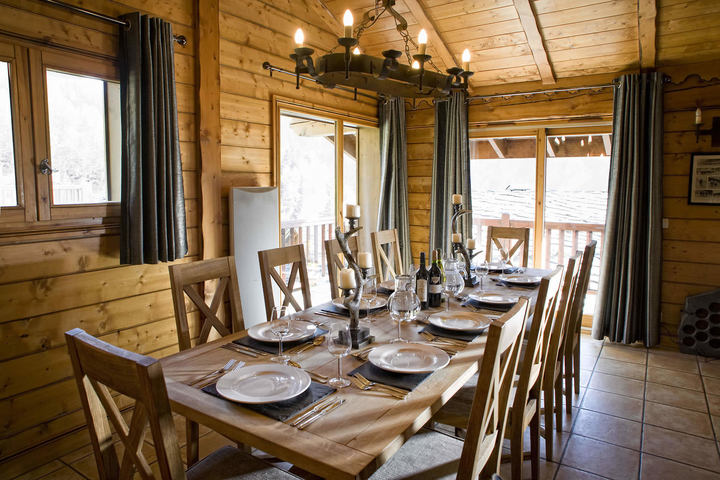 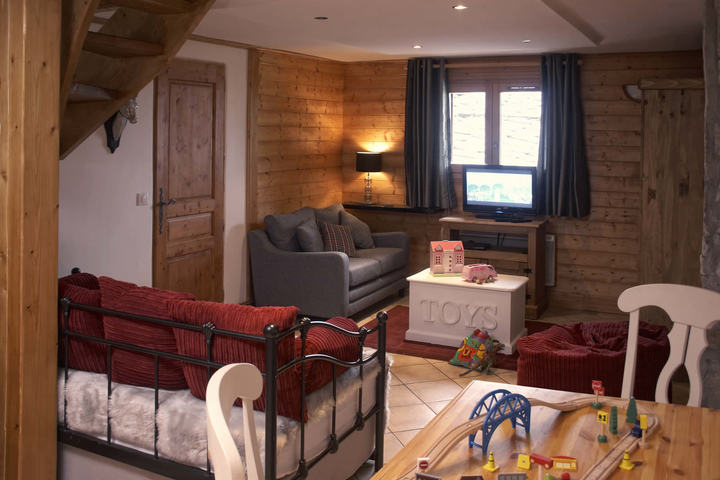 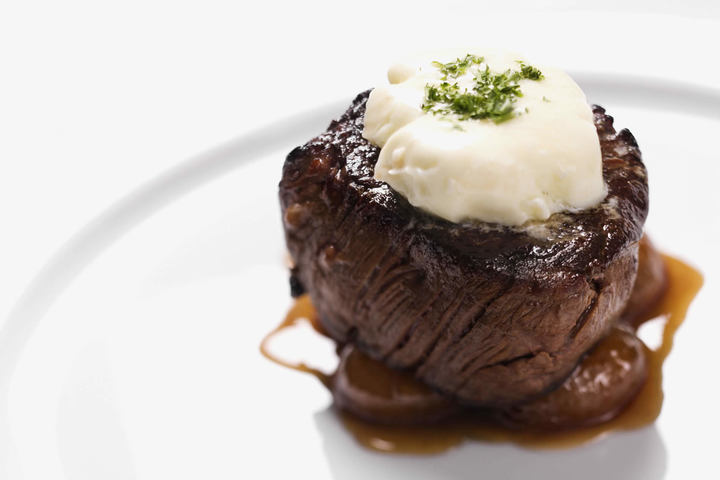 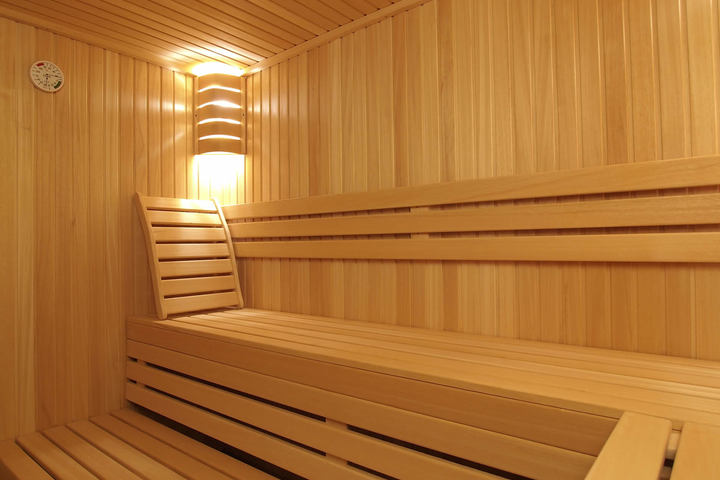 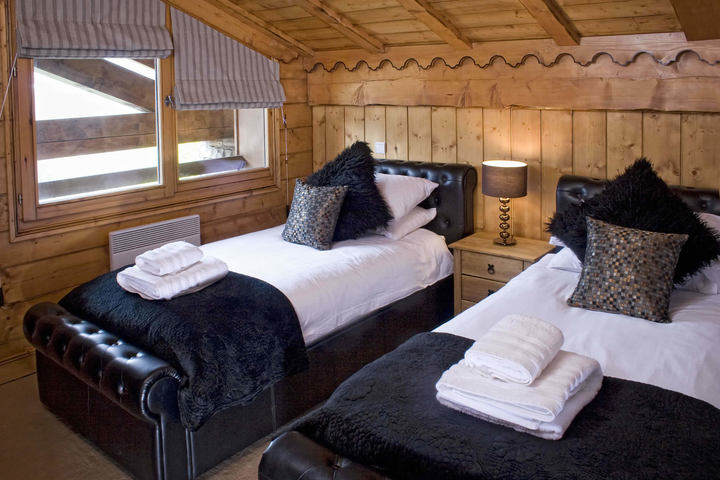 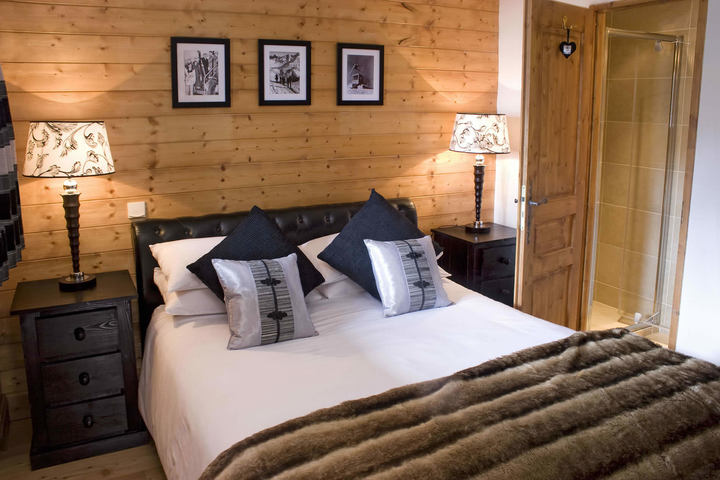 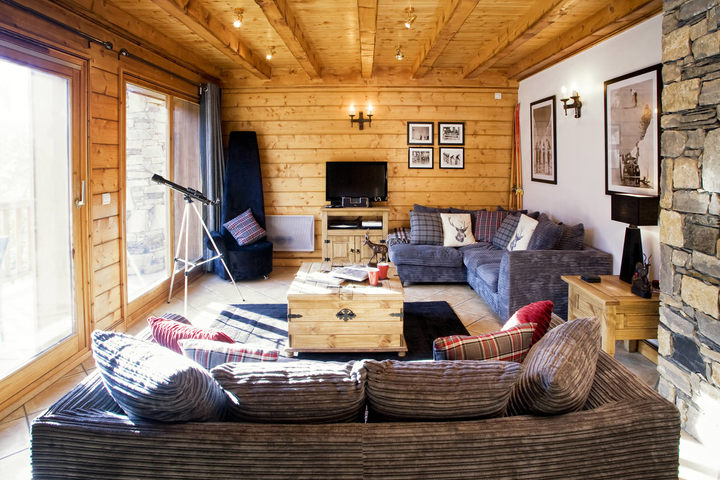 Chalet Shanti is located at the foot of the slopes, 100m from the lifts in a small development. It has a chef and chalet host, large living area with log fire, six bedrooms, five bathrooms, a sauna, Jacuzzi, treatment room and private covered parking. It has a large, open plan living area with a log fire, comfortable seating and dining and a newly refurbished kitchen. Chalet Shanti’s beautifully appointed dining area comfortably seats up to twelve guests. (However children’s mealtimes can be arranged separately).

Your personal chef will provide breakfast, afternoon tea and a three course evening meal with wine everyday except wednesday when you will be free to enjoy any of Sainte Foys great restaurants.

There are six bedrooms at Chalet Shanti. Three on the first floor, one on the ground floor and two on the lower ground floor. Beds are made and rooms are tidied every day except wednesday. Three double rooms and three twins.

There is a sauna, treatment room and outdoor Jacuzzi.

There is a children’s area on the ground floor equipped with television, DVD player and x-box 360. It includes a further fold out double bed if required.

Our Catered Chalet Service includes:
- Seven nights' accommodation (unless otherwise stated)
- Exclusive use of the chalet (unless booked on a per person basis)
- Dedicated service from the chalet or resort staff
- Assistance with ski hire and ski school bookings if required
- Chalet cleaning
- Daily breakfast and afternoon tea
- Drinks and canapés on arrival
- 3-course dinner 6 nights per week (unless otherwise stated)
- Selection of superior house wines, beers and soft drinks

As the Sunday Times said when it voted Sainte Foy the number one family ski resort in the world, "Size doesn't matter". Sainte Foy has everything you need in a resort and nothing you don't.

Four chairlifts serve over 1,000 metres of vertical descent with 35kms of beautifully manicured pistes. There are no difficult drags, just great skiing and riding for all levels, starting with free to use nursery slopes that are right in the centre of the village, undulating blues through the trees for intermediates and challenging reds/blacks for the more confident. Extensive un-groomed areas are also there for the experts. All of our chalets and apartments are close to the lifts.

There are several good restaurants in the resort and three on the mountain, four bars, three spas, two supermarkets and half a dozen ski hire shops renting up-to-the-minute equipment.

Sainte Foy has been designed around families with inter-connecting runs that cater for every level of ability and confidence. The nursery slopes are situated right in the village centre, right next to our chalets and apartments, and are served by two magic carpets (slow moving conveyor belts) rather than rope tows so it's easy for even the least confident youngster.

There are three great ski schools (www.esf-saintefoy.com, www.evolution2saintefoy.com and www.snocool.com) and under sevens ski for free.
Runs of varying difficulty are virtually side by side so you can split up and meet again further down the mountain without losing one another for the rest of the day. We are also blessed with accessible and easy to ski off piste so taking the kids in to the deep stuff is fun and simple and because Sainte Foy is quiet and relatively undiscovered, you won't have to have eyes in the back of your head looking after them on the slopes either.

Instructors from the nearby mega resorts of Val d’ Isere, Tignes and Les Arcs come to Sainte Foy on their days off for some of the best off piste in Europe. The North West facing slopes and lack of people ensure that powder stays great when in other resorts it would have been reduced to icy moguls. Inbounds there are dedicated off piste areas that are patrolled but never pisted. Beyond the lifts, there are various backcountry routes offering descents of varying levels. The north face of the Fogliettaz is the jewel in Sainte Foy's crown, a 45 minute hike from the top of the Aiguille chairlift to the peak of Fogliettaz, you will find a huge north west facing bowl offering 1500 metres plus of vertical.

There are no tour operators in Sainte Foy. They and those not ‘in the know’, thunder past the turn off, en route to our better known sisters Val d’Isere and Tignes. They don’t know that in Sainte Foy the lift passes are almost half the price they are elsewhere. They don’t know about the beautifully groomed pistes. The epic powder. The peace and quiet. They don’t know that you can book a chalet or apartment for a fraction of the price of other resorts. If you are a mileage skier, or nightclub junkie, then Sainte Foy probably won’t be your glass of ‘vin chaud’. If on the other hand you appreciate uncrowded slopes, world class off piste, staggering beauty and quality chalets or apartments, we look forward to seeing you soon.

Sainte Foy and the surrounding area, has excellent facilities for non-skiers or those needing a little R&R. Apart from breathtaking views and the charm of traditional mountain villages we can arrange a wealth of other activities. There are a number of excellent spas in the resort offering pampering for both mind and body. Everything from Frangipan facials to deep muscle massage.

There are helicopter rides which will give you a whole new perspective on the mountains.

Snow shoeing, dogsledding, snowmobiling, ice driving, ski biking, parapenting or even scuba diving under the ice of an alpine lake.

Or maybe you'd prefer to just chill out on the chalet balcony, It is supposed to be a holiday after all.

Sainte Foy is on the edge of the Vanoise National Park in an unspoilt natural environment.

All chalet and apartment development has been carried out to be in harmony with the picturesque hamlets that surround it, you won't find any high rise blocks here. Instead the developers have worked in local stone and wood and kept strictly to the local vernacular. Chalets and apartment buildings are restricted to no more than 3 stories and feature the two sided pitched roofs and stone columns that typify the area.

All new lifts and pistes are strictly controlled and offset measures put in place to limit their impact on the environment. Last year 3,800 conifers were planted to compensate for trees that were felled to make way for the Marquise chair lift.

Even the piste bashers here run on vegetable oil.

If the thought of a hot beach turns you a bit cold, summer in Sainte Foy could be just the remedy you are looking for. In July and August Sainte Foy re-opens after a short break. The summer here is idyllic, with comfortable ambient temperatures, stunning alpine scenery and a wealth of things to do that will keep the whole family happy. There are fetes and fairs where you can sample some of the excellent local fare and plenty of high adrenalin sports, from parapenting to white water rafting, from climbing to mountain biking.

There are 70 Kilometres of walking paths ranging from an easy stroll through the woods to hard core adventure in the high peaks. There is horse riding and ‘Acrobranche’, a high wire walk in the forest. or perhaps you would prefer one of the rustic restaurants in Le Miroir (Chez Merie is pictured here) or Le Crot, for an all day lunch in the sun. Nip over to Italy, for lunch and a spot of pampering at Le Didier thermal spa.

Mountain Biking: Uncrowded well marked trails and varied terrain. The resort provides bike and equipment hire as well as a shuttle bus that will take you up to where you wish to begin and bring you home again when you reach the bottom. the surrounding areas of Les Arcs, Tignes and La Thuile offer a variety of trails from simple easy downhill to tight cornered steep and gnarly.

Sainte Foy is an ideal base for walking having more than 70kms of footpaths, and being close to the Vanoise National Park and new projects such as the " Glacier Haute Route".

It offers some exceptional walks for all levels: hiking and mountaineering, family walks, full/half day excursions, and even treks of several days staying in mountain huts, in France and/or Italy. The many manned mountain huts, in France and Italy, offer the possibility for trips lasting several days. Many of the footpaths pass through traditional alpine villages. Others lead to calm and tranquil mountain lakes, Many walks offer outstanding views of Mont Blanc, ‘the roof of Europe’.

We will be happy to organise expert guides who know the region like the back of their hands.

When it melts, the snow turns the river Isère into one of the best white water rivers in France