This apartment is in a great location for skiing in the winter or hiking in the summer. Located in the Le Britania residence in the center of La Tania it is close to all the ski schools, ski lifts, bars and restaurants. La Tania is a pedestrianized resort so is ideal for families looking for a sa... 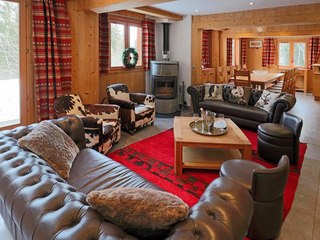 Chalet Panda is a spacious and modern chalet nestled amongst the pine trees in the picture-perfect village of La Tania, Courchevel. The chalet has 6 en-suite bedrooms sleeping up to 12 guests. On the lower ground floor you’ll find a beautifully decorated open plan living and dining area complete ... 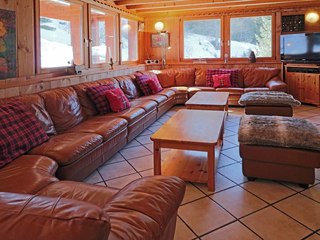 Chalet Beriozka is a charming Savoyarde ski in/ ski out chalet situated in a quiet cu-de-sac amongst the tress above Courchevel La Tania village. The open plan lounge and dining room is a welcoming place to relax on the leather sofas grouped around the log fire. The lounge opens onto a secluded t... 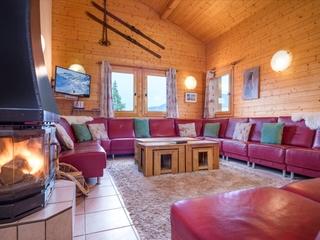 BOOK WITH CONFIDENCE - if government restrictions due to Covid-19 prevent all guests from travelling to the chalet accommodation booked by the party leader or from us operating the chalet, we will offer a full refund up to one week prior to your day of arrival. Please make sure you read our full... 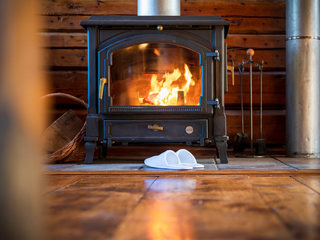 Chalet Elliot East is located in the charming resort of La Tania, which sits between Meribel and Courchevel as part of the vast Three Valleys ski area. The village itself sits inside the tree-line, its snow-topped pines making this a picture postcard resort, and thanks to its small size, it is in... 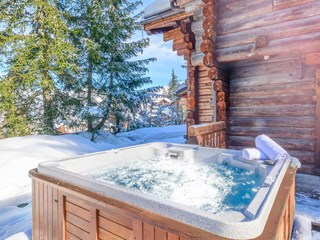 Chalet Elliot West is located in the charming resort of La Tania, which sits between Meribel and Courchevel as part of the vast Three Valleys ski area. The village itself sits inside the tree-line, its snow-topped pines making this a picture postcard resort, and thanks to its small size, it is in... 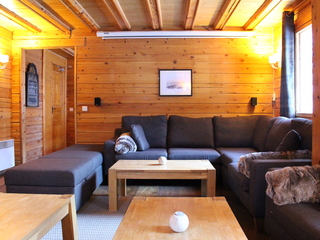 Cosy interiors with a lovely alpine feel, Chalet-Hotel La Tania comfortably sleeps 15 guests in 10 bedrooms. With ensuite shower rooms and WC facilities and a plentiful supply of hot water. The Chalet-Hotel has a fabulous lounge and separate dining room. Each morning a hot and cold buffet ... 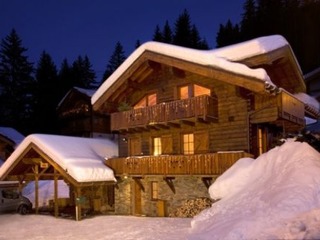 Chalet Rachel has been furnished to a very high standard throughout with an open plan lounge and dining area overlooking the village of La Tania. This lovely chalet nestles in a quiet cul-de-sac between both the green and red pistes and has a secluded outdoor hot tub to relax in at the end of a h...

This 1 bedroom apartment is in a great location for skiing in the winter or hiking in the summer. The apartment can accommodate 4-5 people and is located in the Le Britania residence in the center of La Tania. It is close to all the ski schools, ski lifts, bars and restaurants. La Tania is a pede... 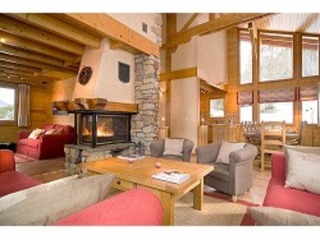 Nestled in the trees, chalet Le Torrent lies a snowball's throw from the ski run and offers fantastic views across the valley. The large, open plan, lounge and dining area has a huge roaring fire, and leads out onto the large terrace that surrounds the chalet, and on sunny days is the perfect pla... 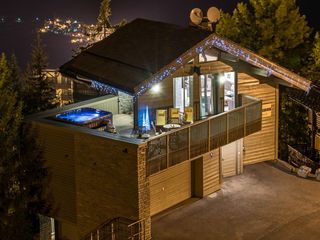 Chalet Elangant is well situated in the centre of family friendly La Tania but also conveniently just metres from the piste. There are eight bedrooms, complete with heated flooring, all with en suite facilities. The chalet has a stylish and modern feel with a luxurious open plan lounge that be...

Comfortable apartments in a renovated residence, with direct access to...

Residence Le Christiana is located in the picturesque village of La Tania, situated between Courchevel and Méribel in a central location in one of the largest ski areas in the world: Les 3 Vallées. La Tania has a cosy, charming and spacious set up and the ski area is easily accessible. The beauti... 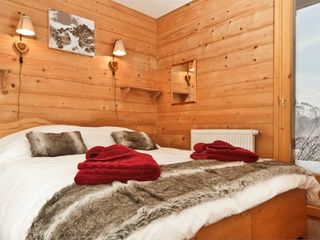 Chalet Jamais Bleu is a stunning chalet, built in typical Savoyard style combining modern living standards but retaining traditional character and charm. The chalet is conveniently located at the foot of the Moretta Blanche piste. It is possible for all levels of skiers to take the 100 metres run... 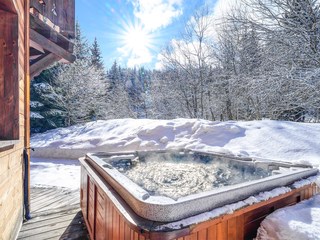 Chalet Morgane is located in the charming resort of La Tania, which sits between Meribel and Courchevel as part of the vast Three Valleys ski area. The village itself sits inside the tree-line, its snow-topped pines making this a picture postcard resort, and thanks to its small size, it is incred... 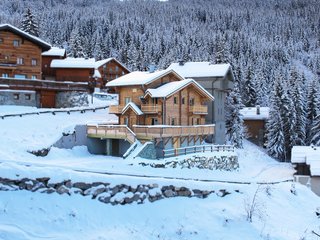 Chalet Chabirusse, catered or self catered chalet , ski to the piste

Chabirusse comfortably sleeps 14 people in six bedrooms, each with French doors opening onto private balconies overlooking the local area and with views of the vast snow capped mountains. The chalet itself boasts an enviable location close to the centre of La Tania village, the pistes and the mai... 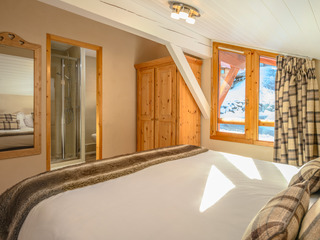 Stunning 14 person chalet next to the piste with hot tub

Ski-in, ski-out Chalet Juliette is just steps away from La Tania’s slopes - a perfect location from which to enjoy the famous Three Valleys skiing. With its outdoor hot tub, boot warmer and unlimited WiFi, the chalet has everything you need for the ultimate ski holiday. The chalet is a mod... 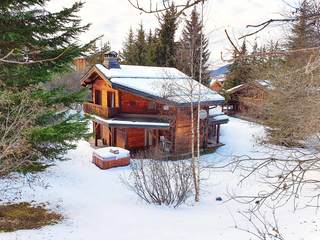 Overlooking the snow covered trees in La Tania, Chalet Lea is a traditional Savoyard chalet with a cosy log cabin feel. The exposed wood beams and roaring fireplace make this chalet a wonderful home from home for a ski holiday with family or friends. Chalet Lea is spread over two floors with six ...

Le Christiana apartments have been recently refurbished in modern alpine style.The residence has a perfect location in the centre of La Tania but also very close to ski schools, ski lifts and ski slopes. We think this is a great value option for families wanting to ski the 3 valleys. All apar...

La Tania is the youngest village in the Three Valleys. Created in 1992 for the Olympic games it is a picturesque traffic free village located at 1350m. It is surrounded on all sides by beautiful alpine forest and has a high speed gondola link to the top of Col de la Loze from where you can easily access Courchevel, Meribel and all the rest of the vast 3 Valleys ski domain. If you want to enjoy the quality skiing provided by the Three Valleys but don’t fancy the eye wateringly high prices of Courchevel then La Tania is a very good option for your ski holiday.

During the 1992 Winter Olympics in Albertville, La Tania was mostly used as accommodation for the journalists covering the games and the ice hockey teams but since then is has growth in popularity for family ski holidays and is now a full ski resort in its own right. It has kept its small village atmosphere but with fast links to the rest of the 3 Valleys it has more than enough skiing for all levels of skiers and snow boarders.

With quick ski lifts to either Meribel or Courchevel 1850 you can access virtually limitless skiing. In total there are over 600km of groomed pistes, with 290 ski runs and over 100km of cross country skiing tracks. A lot of the 3 Valleys skiing is at high altitudes but even then nothing is taken to chance and there are over 1400 snow cannons to provide guaranteed snow conditions throughout the ski season.

There are 3 ski runs of varying difficulties running right back into the resort cutting a fabulous route through the pine forests. The Folyeres blue run has snow cannons to make sure that you can ski home even if you are on a late season ski holiday in La Tania. For total beginners there is a nursery slope right in the village which is very convenient for families learning to ski. For more confident intermediate skiers there are miles and miles of perfectly pistes run right across the 3 Valleys. There is always something new to try each day of your ski holiday. For experts there is an abundance of off piste and free riding options with tree runs, steep couloirs and tricky mogul fields around every corner.

La Tania is well known as a family ski holiday destination but you won’t be disappointed by the nightlife. There are plenty of bars and restaurants and the après ski usually kicks off with live music and parties long into the night.

The accommodation in La Tania is a mixture of catered and self catered apartments and chalets. Being a recently design resort means it benefits from a pedestrianised center which is prefect for kids. Mainly of La Tania’s ski apartments are located on the piste given you perfect ski-in ski-out conditions. The ski apartments in La Tania are mostly self catering so are pefect for families and larger groups.

Chalets are the most popular type of ski accommodation in La Tania. There are many catered chalets located in the forests above the village. Although it is a relatively new resort, La Tania ski chalets have been designed as traditional alpine chalets using a lot of stone and wood. The ski resort has taken great care to preserve the feel of a traditional Savoyard chalet village.

Eating Out in La Tania

Description of the bars and restaurants in La Tania

La Tania is easy to access in the summer and has a very cosy feel nestled in the pine forests. It is a great place for hiking or mountain biking and you have the advantage of being very close to Courchevel and Meribel which both offer lots of summer activities like white water rafting, canyoning and paragliding.

There is a selection of mountain biking routes located between La Tania, Meribel and Courchevel with routes to suit all the family fromm beginners to crazy down hill bikers.